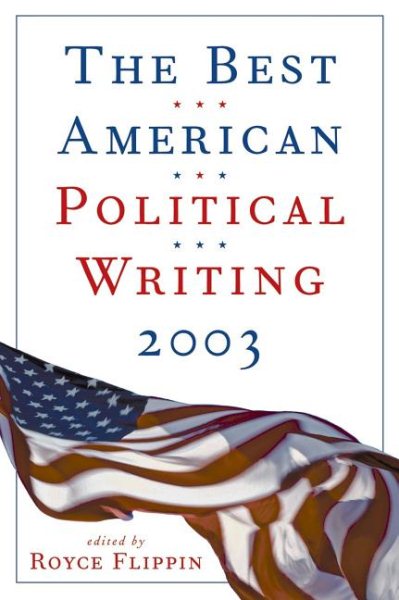 A trenchant, hard-hitting collection of poltical writing from a very eventful year combs the pages of the nation's most important newspapers, magazines, and journals in search of great writing on the mid-term elections, homeland security, Enron, and the run-up to the war in Iraq, among other hot topics. Original. Read More
The Best American Political Writing 2003 preserves the most incisive, controversial, and entertaining writing about the notable events and people of 2002. In a year engulfed in political controversy, from President Bush’s plans for a preemptive war on Iraq to the Enron and Adelphia scandals, American politics provided no shortage of fodder for debate. Gathering from the nation’s leading publications including the New York Times, Washington Post, the New Yorker, the Nation, the Atlantic Monthly, the Weekly Standard, Foreign Affairs, Vanity Fair, and Salon.com, as well as writing from such think tanks as the Heritage Foundation and the Brookings Institution, Royce Flippin culls the best writing on the year’s most talked-about topics. In a year that saw Karl Rove stealthily engineer the decisive drubbing of the Democrats in the 2002 midterm elections, as well as continuing debate over the controversial U.S.A. Patriot Act and the creation of a new Department of Homeland Security, America's finest political reporters — including Joe Klein, Jeff Greenfield, Robert Kagan, Christopher Hitchens, Paul Krugman, Ron Suskind, Elizabeth Kolbert, Michael Ignatieff, Sir John Keegan, Meryl Gordon, Senator Robert Byrd, and Jeffrey Toobin — produced some of the most passionate, disparate, and controversial writing in decades. Read Less