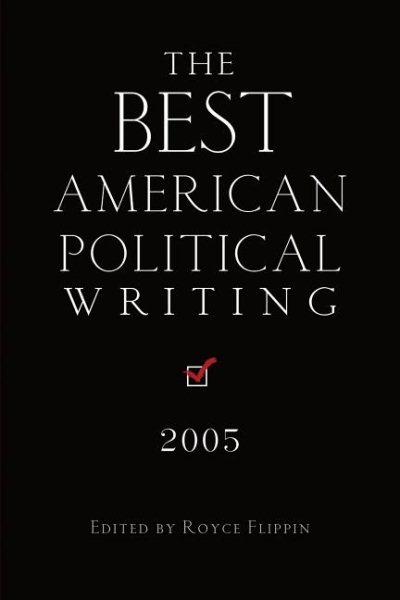 This year's installation to the successful series includes the top commentators on the American political scene reporting on the biggest stories of the past year, from the Bush reelection to the reconstruction of Iraq Read More
The Best American Political Writing 2005 is an annual compendium that culls from the nation's most influential news sources to provide the most incisive, controversial, and entertaining writing about the notable names and events of 2004 and the first half of 2005. From the 2004 presidential election to the reconstruction of Iraq; from Social Security reform to the future of the Supreme Court; from the war on terrorism and who is next to repairing American ties with Europe; editor Royce Flippin provides a diverse collection of insights, opinions, and analysis on the political events that shaped the past year. With selections from leading publications, including the New York Times, the Washington Post, the New Yorker,the Nation, Foreign Affairs, Time, Harper's, Vanity Fair, and the Atlantic, as well as think tanks such as the American Enterprise Institute and the Brookings Institution. In addition, writings from the nation's top political commentators, including Ron Suskind, Peter Beinart, James Fallows, Joshua Green, Naomi Klein, Michael Wolff, Christopher Hitchens, and Philip Gourevitch, among many others, are also featured. Read Less