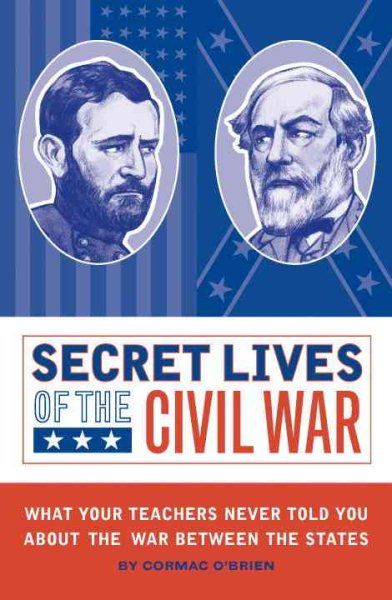 Provides the birth and death dates, astrological sign, nicknames, famous words, and little-known or bizarre facts about the lives of over twenty-five people on the Union and Confederate sides of the Civil War. Read More
Legendary Heroes of U.S. History—As You’ve Never Seen Them Before!   Secret Lives of the Civil War features irreverent and uncensored profiles of men and women from the Union and the Confederacy—complete with hundreds of little-known and downright bizarre facts. You’ll discover that:        •  Mary Todd Lincoln claimed to receive valuable military strategies from ghosts in the spirit         world.      •  Jefferson Davis once imported camels for soldiers stationed in the American southwest.      •  Ulysses S. Grant spent much of the Vicksburg campaign on a horse named “Kangaroo.”      •  James Longstreet fought the Battle of Antietam wearing carpet slippers.      •  William T. Sherman was the victim of two shipwrecks on the same day.      •  Harriet Tubman experienced frequent and bizarre hallucinations.      •  Stonewall Jackson was a notorious hypochondriac (he always sat up straight, fearing that         slouching would compress his vital organs).   With chapters on everyone from William Quantrill (a guerilla leader whose skull later ended up in the basement of a fraternity house) to Rose O’Neal Greenhow (perhaps the South’s most glamorous spy), Secret Lives of the Civil War features a mix of famous faces and unsung heroes. American history was never this much fun in school! Read Less

Goodreads reviews for Secret Lives of the Civil War: What Your Teachers Never Told You about the War Between the States

Secret Lives of the U.S. Presidents: What Your Teachers Neve...

Secret Lives of the First Ladies: What Your Teachers Never T...