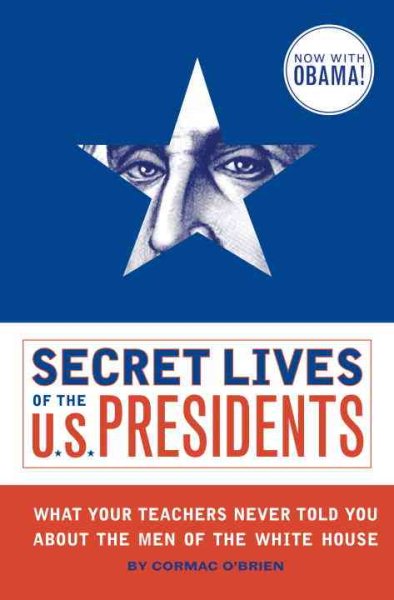 Presents little-known facts and trivia about the United States presidents, from George Washington to Barack Obama, including information on personal lives, political stances, and election scandals. Read More
Murder, Adultery, Gambling, UFOs - And the White House?!?   Your high school history teachers never gave you a book like this one! Secret Lives of the U.S. Presidents features outrageous and uncensored profiles of the men in the White House—complete with hundreds of little-known, politically incorrect, and downright wacko facts. You’ll discover that:        •  George Washington spent a whopping 7% of his salary on booze      •  John Quincy Adams loved to skinny-dip in the Potomac River      •  Gerald Ford once worked as a Cosmopolitan magazine cover model      •  Warren G. Harding gambled with White House china when he ran low on cash      •  Jimmy Carter reported a UFO sighting in Georgia      •  And Richard Nixon . . . sheesh, don’t get us started on Nixon!   With chapters on everyone from George Washington to Barack Obama, Secret Lives of the U.S. Presidents tackles all the tough questions that other history books are afraid to ask: How many of these guys were cheating on their wives? Are there really secret tunnels underneath the White House? And what was Nancy Reagan thinking when she appeared on Diff’rent Strokes? American history was never this much fun in school! Read Less

Goodreads reviews for Secret Lives of the U.S. Presidents: What Your Teachers Never Told You About the Men of the White House

Secret Lives of the Civil War: What Your Teachers Never Told...

Secret Lives of the First Ladies: What Your Teachers Never T...