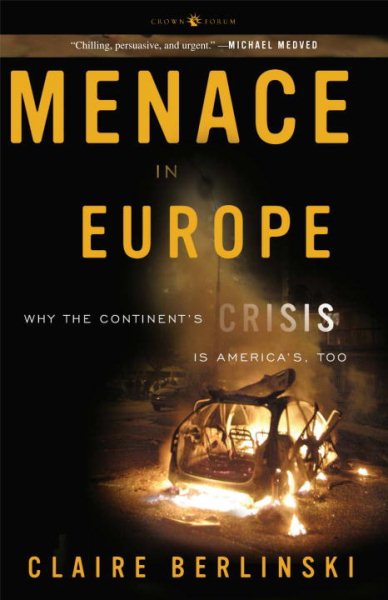 A provocative study of the critical problems that are crippling Europe and causing an increasing anti-Americanism looks at the return of the ethnic hatred, class divisions, and war that previously wreaked havoc on Europe, as well as the rise of such new issues as declining birthrates, growing Islamic fundamentalism, and an unsustainable economic model. Reprint. 15,000 first printing. Read More
Old Europe’s new crisis.Europe, the charming continent of windmills and gondolas. But lately, Europe has become the continent of endless strikes and demonstrations, bombs on the trains and subways, radical Islamic cells in every city, and ghettos so hopeless and violent even the police won’t enter them. In Spain, a terrorist attack prompts instant capitulation to the terrorists’ demands. In France, the suburbs go up in flames every night. In Holland, politicians and artists are murdered for speaking frankly about Islamic immigration. This isn’t the Europe we thought we knew. What’s going on over there?Traveling overland from London to Istanbul, journalist Claire Berlinski shows why the Continent has lately appeared so bewildering—and often so thoroughly obnoxious—to Americans. Speaking to Muslim immigrants, German rock stars, French cops, and Italian women who have better things to do than have children, she finds that Europe is still, despite everything, in the grip of the same old ancient demons. Anyone who knows the history can sense it: There is something ugly—and familiar—in the air.But something new is happening as well. Indeed, Europe now confronts—and seems unable to cope with—an entirely new set of troubles. Tracing the ancient conflicts and newly erupting crises, Menace in Europe reveals:• Why Islamic radicalism and terrorist indoctrination flourish as Europe fails to assimilate millions of Muslim immigrants• How plummeting birthrates hurtle Europe toward economic and cultural catastrophe • Why hatred of America has become ubiquitous—on Europe’s streets, in its books, newspapers, and music, and at the highest levels of government• How long-repressed destructive instincts are suddenly reemerging• How the death of religious faith has created a hopeless, morally unmoored Europe that clings to anti-Americanism, anti-Semitism, and other dangerous ideologies• Why the notion of a united Europe is a fantasy and what that means for the United StatesIn the end, these are not separate issues. Berlinski provocatively demonstrates that Europe’s political and cultural crisis mirrors its profound moral and spiritual crisis. But this is not just Europe’s problem. Menace in Europe makes clear that the spiritual void at the heart of Europe is ultimately our problem too. And America will pay a terrible price if we continue to ignore it.From the Hardcover edition. Read Less

Goodreads reviews for Menace in Europe: Why the Continent's Crisis Is America's, Too