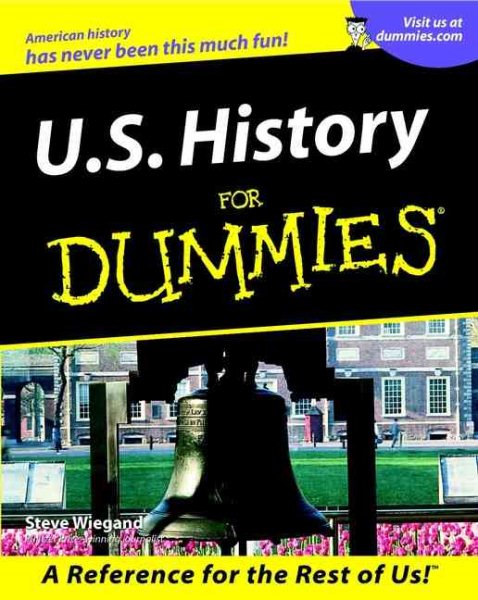 Provides basic information about U.S. history, discusses influential people, and highlights important dates and events. Read More
Lots of people think that learning U.S. history is a punishment. It's a subject you had to take in school. You memorized a bewildering array of dates, absorbed definitions for terms like Manifest Destiny, and wondered if America really needed two presidents named Harrison. Historical figures were presented to you as if they were characters in a junior high school costume pageant, with their blemishes airbrushed out and personalities drained away in stodgy history textbooks.History textbooks often overlook the fascinating moments of history. They present U.S. history as something dry and distant, all events and facts, and don't focus on what is really is: The story of Americans. It's the story of people – what they thought, did, and tried to do as they struggled to build a nation.U.S. History For Dummies is not a textbook. It focuses on people – famous, infamous, and obscure. This book gives you a basic foundation of information about the history of the United States. Students and teachers can use it as a friendly, easy-to-understand overview of U.S history, and history buffs can use it as a reference to look up important facts, to settle debates, and to store up ammunition for future conversations with a know-it-all brother-in law!Here's just a sampling of the topics covered in U.S. History For Dummies:Pre-Columbus: The earliest Native AmericansThe settling of the Pilgrims and the expansion toward the WestThe American Revolution and the establishment of a new governmentHow the most influential presidents governed the nationThe Civil War and the abolishment of slaveryThe development of modern industryTwo World Wars and a Great DepressionAmerica matures through tragedy: The Kennedy Assassination, the Vietnam War, and WatergateU.S. History For Dummies also includes Top Ten lists covering the best – and worst – presidents, inventions that changed the world, and events that defined American culture. Read Less

The Mental Floss History of the World: An Irreverent Romp Th...

The Mental Floss History of the World: An Irreverent Romp th...