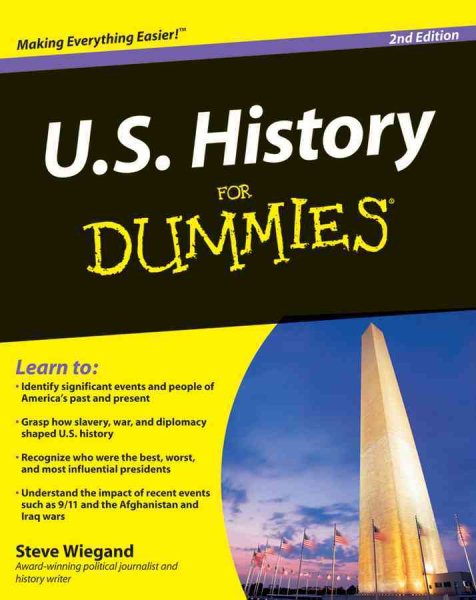 Provides basic information about U.S. history, discusses influential people, and highlights important dates and events. Read More
Now revised ? the easy-to-understand guide to the story of AmericaWant to better understand U.S. History? This friendly book serves as your tour guide through the important events of America's past and present, introducing you to the people who helped to shape history. From pre-Columbus to the American Revolution, from Watergate to Iraq to Barack Obama, you'll discover fascinating details that you won't find in dry history texts! They're coming to America ? explore early civilizations, meet Native Americans, and see how the development of the English colonies led to slavery and the American Revolution From Thomas Jefferson to Abraham Lincoln ? examine the contributions of great Americans as well as the discovery of gold, the birth of California, the Civil War, and Manifest Destiny America grows up ? be there during the conquering of the West, industrial development, and the invention of the light bulb and the telephone The impact of the World Wars ? understand the sweeping changes these epochal events brought to America and the rest of the world The Cold War, Camelot, and Clinton ? take a closer look at the Korean War and communism, the fabulous '50s, JFK, Vietnam, Nixon and Watergate, Reaganomics, and the Clinton years From the '90s to now ? witness the birth of the microchip, the impact of hanging chads in a presidential election, the largest terrorist attack on American soil, and the growing economic crisisOpen the book and find: Ten important events that defined American culture Interesting Americans, from presidents to gangsters to sports heroes How America fought to win independence from England Details about all the major wars and their long-term effects Insight into the roots of slavery Inventions that changed life for Americans The impact of the atomic bomb The Bill of Rights and the Declaration of Independence Read Less

The Mental Floss History of the World: An Irreverent Romp Th...

The Mental Floss History of the World: An Irreverent Romp th...