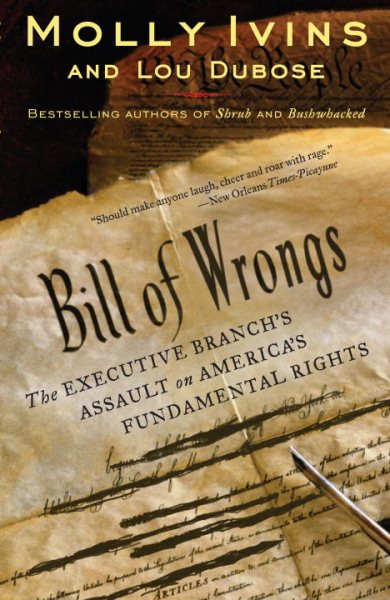 A critical exposé of the American government and the Bush administration examines how the rights guaranteed in the Bill of Rights are being gradually eroded and undermined and pays tribute to ordinary people across the country who have gone to great lengths to protect those rights. By the late author of Who Let the Dogs In? Reprint. 30,000 first printing. Read More
In this, her final and perhaps greatest book, Molly Ivins launches a counterattack on the executive branch&apos;s shredding of our cherished Bill of Rights. From illegal wiretaps and the unlawful imprisonment of American citizens to the creeping influence of religious extremism on our national agenda and the erosion of the checks and balances that prevent a president from seizing unitary powers, Ivins and her longtime collaborator, Lou Dubose, describe the attacks on America&apos;s vital constitutional guarantees. With devastating humor and keen eyes for deceit and hypocrisy, they show how severe these incursions have become, and they ask us all to take an active role in protecting the Bill of Rights.Praise for Bill of Wrongs:&apos;Should make anyone laugh, cheer and roar with rage.&apos;&apos;New Orleans Times-Picayune&apos;[Molly Ivins is] wonderfully direct about the costs of our lost civil liberties. . . . Ivins&apos; voice&apos;in all its drawling, acerbic, storytelling, fearless glory&apos;is stilled now. . . . But her message lives on. And every thoughtful American ought to be listening.&apos;&apos;The Buffalo News&apos;With her characteristic acerbic humor, Ivins and colleague Dubose dissect the myriad attacks the Bush administration has made on the Bill of Rights and how ordinary citizens have fought back.&apos;&apos;Booklist&apos;Ivins&apos; own description of the book is spot-on: &apos;a hopeful and gladsome romp through some serious terrain.&apos;&apos;The New York Observer&apos;A truly compelling read . . . filled with devastating humor and razor-sharp commentary.&apos;&apos;Austinist Read Less