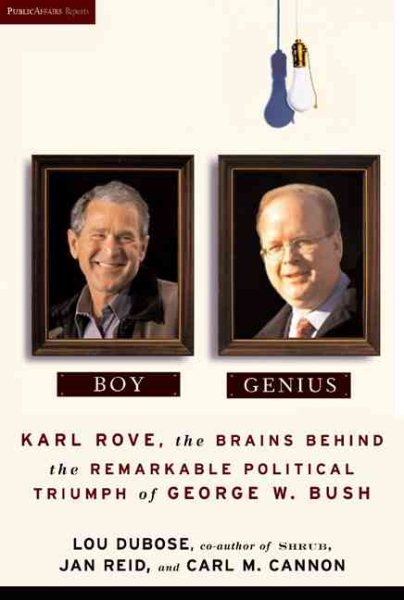 Traces the rise of the man credited with engineering George W. Bush's election in 2000 and the Republican midterm election victory in 2002, describing his tactics and revealing the true workings of American politics. Read More
Karl Rove has remade American politics. Even though few Americans know his name, he has been the guiding force behind George W. Bush's march to the White House and the stunning Republican victory in the 2002 midterm elections. In Boy Genius, three veteran political reporters introduce us to the man and his methods. From a rowdy past as a young Republican in Richard Nixon's Washington; to masterminding the defeat of Ann Richards, the popular governor of Texas; to his triumphs on the national stage, Karl Rove has taken no prisoners in his quest to elect his candidates and destroy his rivals. Lou Dubose, Jan Reid, and Carl M. Cannon have written a fascinating, entertaining look at the political life of the Man Who Would Be Kingmaker - and a vivid portrait of how politics is played today. Read Less