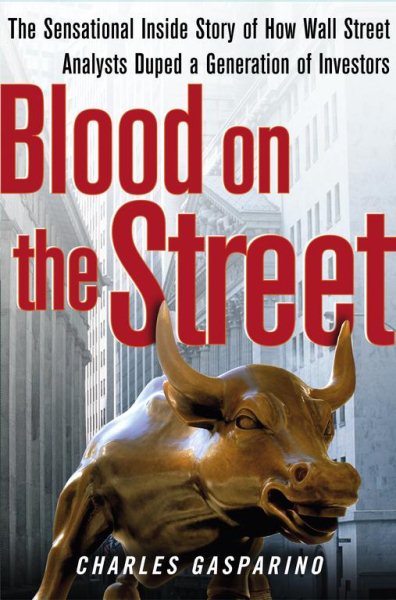 Discusses Wall Street price manipulation practices that were used throughout the 1990s by three individuals from Salomon Smith Barney, Morgan Stanley, and Merrill Lynch who were responsible for scamming investors out of millions of dollars. Read More
Blood on the Street is a riveting account of the Wall Street scam in which ordinary investors lost literally billions of dollars -- in many cases their life savings -- in one of the greatest deceptions ever, by the crack reporter who broke the original story. In one of the most outrageous examples of dirty dealing in the history of Wall Street, hundreds of millions of dollars in illicit profits were made during the booming 1990s as a result of research analysts issuing positive stock ratings on companies that kicked back investment banking business. Now, for the first time, award-winning journalist Charles Gasparino reveals the whole fascinating story of greed, arrogance, and corruption. It was Gasparino's front-page reporting in The Wall Street Journal that brought the story to national attention and spurred New York State attorney general Eliot Spitzer to launch an official probe. Now, Gasparino goes behind his own headlines to tell the inside story of this spectacular swindle -- with revelations from his unprecedented access to never-before-published depositions and documents, including e-mail exchanges leading all the way up to Citigroup CEO Sanford Weill. Drawing on his research and interviews with industry insiders, Gasparino takes readers into the back rooms of Wall Street's top investment firms and captures the outsize personalities of three key players: Salomon Smith Barney's Jack Grubman, a braggart with one of the largest salaries on Wall Street; Merrill Lynch's Henry Blodget, the Yale graduate who hyped his way to the top of the research pyramid; and Morgan Stanley's Mary Meeker, the "Queen of the Internet," who foresaw the market catastrophe but gave in to the pressures Blood on the Street shows how regulators, like former SEC chairman Arthur Levitt, allowed the deceptive practices to fester and grow during the 1990s bubble, leaving the door open for a then- little-known attorney general from New York State to step in and make his mark by holding Wall Street accountable. Gasparino provides the first major account of Spitzer's rise to prominence, detailing how the attorney general pursued key players to build his case against Wall Street, including his shifting allegiance to the powerful New York Stock Exchange chairman Richard Grasso. A fast-paced narrative rich in sharp insights, Blood on the Street is the definitive book on the financial debacle that affected millions of Americans. Read Less

Goodreads reviews for Blood on the Street: The Sensational Inside Story of How Wall Street Analysts Duped a Generation of Investors