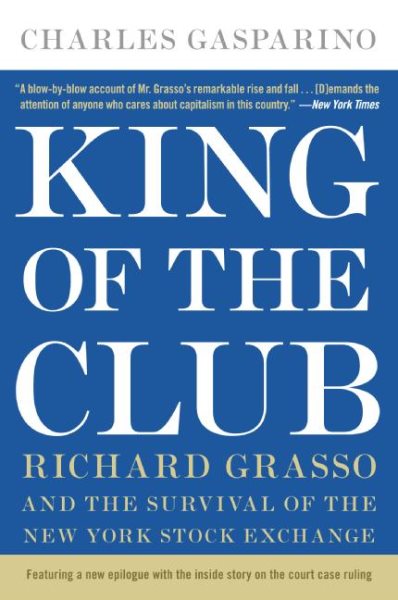 Documents the rise and fall of the New York Stock Exchange chairman, from his contributions as one of the nation's most influential businesspeople and his popularity for his role in helping Wall Street to recover from the September 11 attacks, to the 2003 disclosure of his $140 million pay package and the lawsuit filed against him by New York State Attorney General Eliot Spitzer. Reprint. 50,000 first printing. Read More
Rags-to-riches stories abound in American lore, but even Horatio Alger would have been hard-pressed to write one as powerful as Richard Grasso's: the son of a working-class family whose childhood dream was to become a cop. He grew up in New York City's outer boroughs, far removed from the marble halls, expensive suits, and imported cigars of the New York Stock Exchange. Here is the riveting story of how he rose to become the most influential CEO in the Exchange's history. Minus the tony upbringing, affluent prep schools, or inside connections that were de rigueur for top Wall Street players, Grasso would master the subtle deal-making and politics necessary to succeed in the most competitive business on Earth. But despite his successes, Grasso would soon sow the seeds of his own downfall, an event that would change the Exchange forever.The King of the Club paperback edition, featuring a full update on the story, chronicles the amazing rise, fall, and possible rise again of Richard Grasso, and also tells the modern history of the all-powerful institution that he came to symbolize: The New York Stock Exchange. Read Less

Goodreads reviews for King of the Club: Richard Grasso and the Survival of the New York Stock Exchange