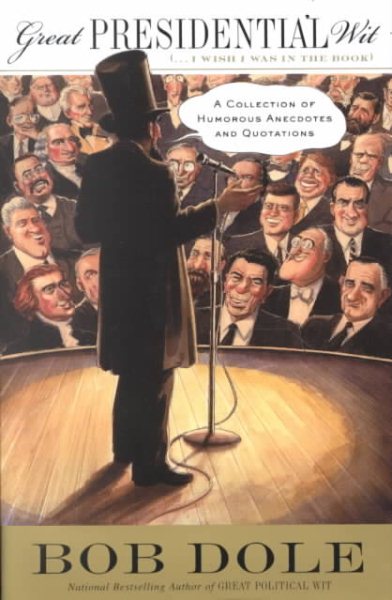 The former senator and presidential candidate collects bipartisan presidential humor from famous, and not-so-famous, chief executives, from Washington to Clinton. Read More
Famous for his deadpan humor, New York Times bestselling author Senator Bob Dole here brings us his favorite witticisms and hilarious remarks of this country's commanders in chief. Referring to his own run for the presidency, Senator Dole writes: "President Nixon and I have much in common. We both grew up amidst rural privation. We both served in World War II. We both served in the House and Senate. Of course, there are some differences as well. That's why we call him President Nixon." Just in time for the inauguration and President's Day comes this delightful book chock-full of presidential quips and humor collected by Senator Dole -- one of the country's most recognizable political figures and commentator for Comedy Central's Indecision 2000. Great Presidential Wit collects the former senator's favorite funny stories and remarks by and about American presidents -- from George Washington to the first president elected in the twenty-first century. Senator Dole tackles the assignment of ranking the presidents from the funniest (Abraham Lincoln) to the least funny (Millard Fillmore), and everyone in between. With chapters cleverly organized according to the senator's own opinions -- from "A Class by Themselves" (Lincoln, Reagan, the Roosevelts) and "Yankee Wits" (Coolidge, Kennedy) to "The Joke's on Them" (Taylor, Harding, Van Buren, Buchanan, the Harrisons, Pierce, Fillmore) -- Great Presidential Wit is the perfect antidote to the long political season. Read Less