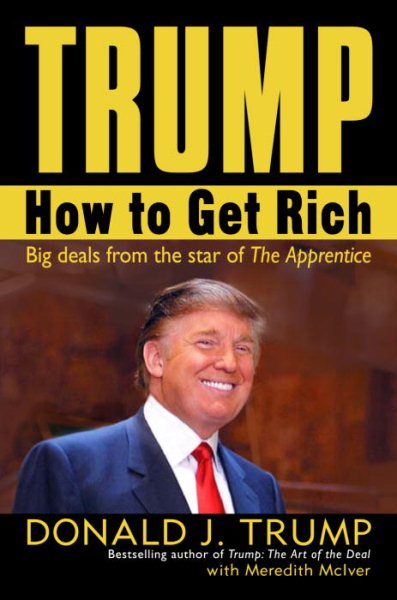 The author describes the secrets of his success and offers advice on such topics as investments, hiring and firing employees, and negotiation, and includes reflections on his television program "The Apprentice." Read More
First he made five billion dollars.Then he made The Apprentice.Now The Donald shows you how to make a fortune, Trump style.HOW TO GET RICHReal estate titan, bestselling author, and TV impresario Donald J. Trump reveals the secrets of his success in this candid and unprecedented book of business wisdom and advice. Over the years, everyone has urged Trump to write on this subject, but it wasn’t until NBC and executive producer Mark Burnett asked him to star in The Apprentice that he realized just how hungry people are to learn how great personal wealth is created and first-class businesses are run. Thousands applied to be Trump’s apprentice, and millions have been watching the program, making it the highest rated debut of the season.In Trump: How To Get Rich, Trump tells all–about the lessons learned from The Apprentice, his real estate empire, his position as head of the 20,000-member Trump Organization, and his most important role, as a father who has successfully taught his children the value of money and hard work.With his characteristic brass and smarts, Trump offers insights on how to• invest wisely• impress the boss and get a raise• manage a business efficiently• hire, motivate, and fire employees• negotiate anything• maintain the quality of your brand• think big and live largePlus, The Donald tells all on the art of the hair!With his luxury buildings, award-winning golf courses, high-stakes casinos, and glamorous beauty pageants, Donald J. Trump is one of a kind in American business. Every day, he lives the American dream. Now he shows you how it’s done, in this rollicking, inspirational, and illuminating behind-the-scenes story of invaluable lessons and rich rewards. Read Less

Goodreads reviews for Trump: How to Get Rich

Trump: The Art of the Deal