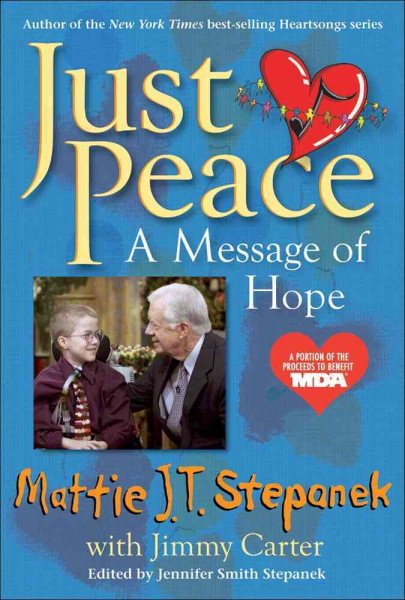 Brings together the late young author's essays, poems, artwork, and e-mail correspondence with former President Jimmy Carter to share his message of hope for universal peace. Read More
"I was touched by the depth of passion and awed by the firm resolve with which Mattie Stepanek pursued a dream that has evaded men and women throughout history. What began as a casual discourse, not too different from others I have had with inquisitive young people who have reached out to me, became a treasured and enlightening friendship that changed my life forever. With the purity of heart that only a child can possess, and the indomitable spirit of one who has survived more physical suffering than most adults will ever know, Mattie convinced me that his quest was not inconceivable. Inspired by his enthusiasm and without reservation, I committed to a partnership with him. . . . These words of wisdom and inspiration came from the most remarkable person I have ever known." --Jimmy Carter Sometimes the most important messages come from the most unlikely places. Mattie J.T. Stepanek, a 13-year-old boy, made a difference before he died with his Heartsongs poetry. He continues to impact the world through Just Peace. This poet, best-selling author, peace activist, and prominent voice for the Muscular Dystrophy Association fervently believed in and promoted world peace not just as a concept, but as a reality.Mattie was working on this manuscript with Jimmy Carter when he died in June 2004. His mother, Jeni, who edited the material and wrote a preface for the book has published it at her son's request. Just Peace explores Mattie's concept of the world and all people as a unique mosaic of gifts. War and injustice shatter the mosaic, which can only be made whole again by planning and actively pursuing peace. The young visionary's essays, poetry, and photographs appear throughout the book. Jimmy Carter has written a special foreword for the book.Just as important to the book and enlightening to the reader are Mattie's many correspondences. Central to these are his personal e-mails to and from former president Jimmy Carter, Mattie's peace "hero" and role model. The Nobel Peace Prize winner met Mattie, considered him an angel, messenger, and hero in his own right, and was genuinely affected by Mattie's passion and drive. Just Peace is an intimate portrait of a president, a young man of hope, and peace itself. Read Less

Goodreads reviews for Just Peace: A Message of Hope