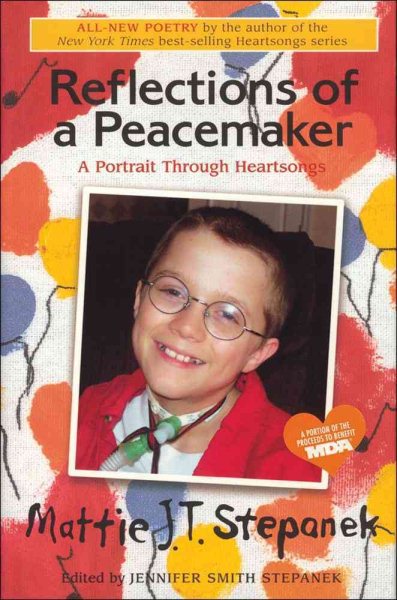 A final collection of poems by the late young poet expresses his thoughts and feelings on such topics as peace, nature, death, hope, war, and faith. Read More
I write about anything that touches the essence of my existence. What I witness, what I feel, what I think, what I fear, what I treasure. I write about life, which is our greatest gift." --Mattie Stepanek, 1990-2004 Mattie J. T. Stepanek lived and died a child, but he had the spirit of a giant. Affected by a rare and fatal neuromuscular disease, Mattie lived almost fourteen years but in that time became a poet, best-selling author, peace activist, and a prominent voice for the Muscular Dystrophy Association. Before his death in June 2004, his five volumes of Heartsongs poetry sold more than a million copies.Reflections of a Peacemaker: A Portrait Through Heartsongs is the final collection of Heartsongs that Mattie was working on when he died. It includes the last poem Mattie penned along with a special collection of unpublished poetry, photographs, and artwork spanning the decade from when he began writing Heartsongs at age three. Culled from the thousands of poems, essays, and journal entries Mattie left behind, the entries inReflections of a Peacemaker create a portrait of Mattie in his own words. In these poems he explores disability, despair, and death but also the gifts he finds in nature, prayer, peace, and his belief in something "bigger and better than the here and now." The poems are grouped by theme such as playful, stormy, sacred, and final Heartsongs, with each section introduced by a personal tribute from the likes of Maya Angelou, Oprah Winfrey, Larry King, and former President Jimmy Carter. In the words of Mattie's mother, Jeni Stepanek, who has published Reflections of a Peacemaker at her son's request, "In reading these poems we enter Mattie's world and gain insight through a child who somehow balanced pain and fear with optimism and faith." Read Less

Goodreads reviews for Reflections of a Peacemaker: A Portrait Through Heartsongs

Just Peace: A Message of Hope