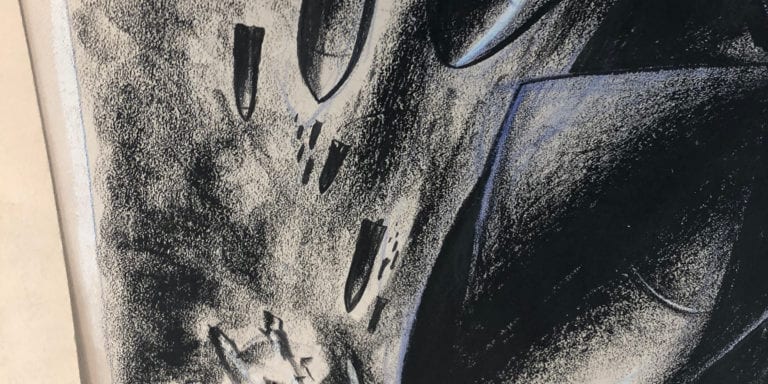 Our comments were down for the last few posts. We’ve resolved the issue, so you should be able to post your comments now (on this post and earlier posts.) Please contact us with any issues. We apologize for the inconvenience!

The eastern world, it is explodin’.
Violence flarin’. bullets loadin’.
You’re old enough to kill but not for votin’.
You don’t believe in war, but what’s that gun you’re totin’.
And even the Jordan river has bodies floatin’.
But you tell me over and over and over again my friend,
Ah, you don’t believe we’re on the eve of destruction…

I’m in Chicago for CIROBE (Chicago International Remainder and Overstock Book Expo—that is a mouthful!) How I got here is a blur. That is because my “getaway day” turned into a frenetic jumble of confusion, tumult, chaos (and redundancy.)

Thursday began normally enough. I got up early and packed. I closed up the house and bumped down the mountain. At the book warehouse, I did my daily “first thing” perambulation through the sprawling building. I look for problems and projects and priorities in every department. I ask the three managers in the office: “Are we doin’ ok?”

Most of the week had been shot by the semi annual Arlington Virginia Library Book Sale pickup. They always have a LOT of books left. We’d sent two big vans and four guys Tuesday. One van broke down on the way back. Shorthanded, only one van and two guys went on Wednesday. We have six vans but only three have a low enough profile to get into the underground garage beneath the library where the sale is held. With one out of service that meant we had to get the remaining two unloaded and ready to go. Of course, one of those was at the Hagerstown store. (We always have a van or truck at each of the three stores so books customers bring to sell us can quickly be transferred from their vehicle to ours in the parking lot.) So, the first order of business was to get another van unloaded so the Hagerstown van could get retrieved. As soon as possible, Clif took off to get that van. Then the car repair people called and said the broken down van was too heavily laden with books for their hydraulic lift.

“Would you come and empty so we can get to work on it?”

Ok. ANOTHER van to empty to go and fill from that van.

Of course, the usual pandemonium was in full force. Three people were sorting “raw books.” They empty boxes of books we’ve acquired and triage them using a pretty complex formula so that books that go to the 25 or so data entry stations are appropriate. They segregate very old and potentially valuable books. They also separate books that that don’t have ISBN numbers or barcodes so another, more experienced, sorter can review those and decide if they are appropriate for online sales or the stores or Books By the Foot or, if they are completely hopeless, send them to “oblivion” for recycling as pulp paper.

Then the first in a series of unexpected deliveries began. A car or van or pickup truck backed up to Dock 1 or 2 and someone got out to unload it. One of the experienced sorters then went out and reviewed the books and made a bulk offer based on the overall quality (or lack thereof.)

Distraction after distraction. Clif got back and he, Ernest and couple guys headed off to Arlington. I knew they’d be gone most of the day.

My son, Joey, was at the warehouse, and when the call came from Gaithersburg that their van was full, he was the only choice. We were out of vans however, so he drove his car down I-270 to bring back that van so it could be emptied and then returned to that store so more buys could be put in it. When he returned, we found people to unload THAT van.

“They’re out of money down there too.”

They had spent all the cash on hand on books buys in the last few days and hadn’t thought to warn us. I pulled out my wallet and pulled out what I had and counted it out to him.

“Get one of the managers to write me a check to reimburse me.”

Then Nelson backed up a 17 foot UHaul truck to Dock 1. Nelson Freck is a book legend in the DC region. Someday there likely be a blog about him. He scouts a lot of house calls for us around. This was the first load of a 15,000 book hoard in Northern Virginia. I’m usually happy to see him. He helps feed the “beast” here. We need constant influxes of books to keep all the people here—80 or 90—employed. We need the revenue to pay the bills and loans and payroll and taxes and taxes…

I need the fresh books every day. Otherwise I’d get bored. Perhaps there’s some psychological mania at work here as well. No, I’m not crazy…I don’t think.

We were now pulling employees from different parts of the warehouse to help unload and move boxes of books.

I threw myself into the breach and began pumping one of the pallet jacks and pulling tons of books from one place to another. Sorters needed books to sort. Data entry folks needed books to try to put online. Sorters needed sorted books removed. Tall Gaylords loaded with empty boxes needed to be taken out to the crusher at Dock 4 (We recycle tons of corrugated paper every month.) Pallets laden with newly arrived boxes needed to be removed so more boxes could be unloaded from Nelson et al.

Then a text came onto my phone. It said: “Maybe Nellie.”

I opened it, and it was indeed Nellie. She wanted to bring the last load of her stuff in. She was an Antique Mall bookseller for many years and was retiring and moving to New England. “I’m in town to settle on the house so we can move. Also, because of recent cancer diagnosis I’m in a selling mood. (The good news is that it is early and very treatable.) It’s 60s stuff I wasn’t sure I wanted to sell. Are you there if I come over?”

Then the Frederick store called: “Our van is full.”

The only vehicle left was our 24-foot box truck.

“We’ve got to get that unloaded too.”

I walked out to Dock 1 for the dozenth time (at least.) She and her husband we setting boxes on it. I knelt onto the cold hard metal and began opening them.

History poured out. I unfolded the lid on a box of photos—mostly contact sheets—from Vietnam, both North and South.

Another box held 8 flat photographic paper boxes. They were about 1 1/2 inches thick and 10×12 inches wide. Each had their contents marked in ink… “Protest.” “Dead Panther Funeral.” “Cops and Protesters.” “Mini Skirt / Subway” …

Lifting the lid on those opened history to my eyes. 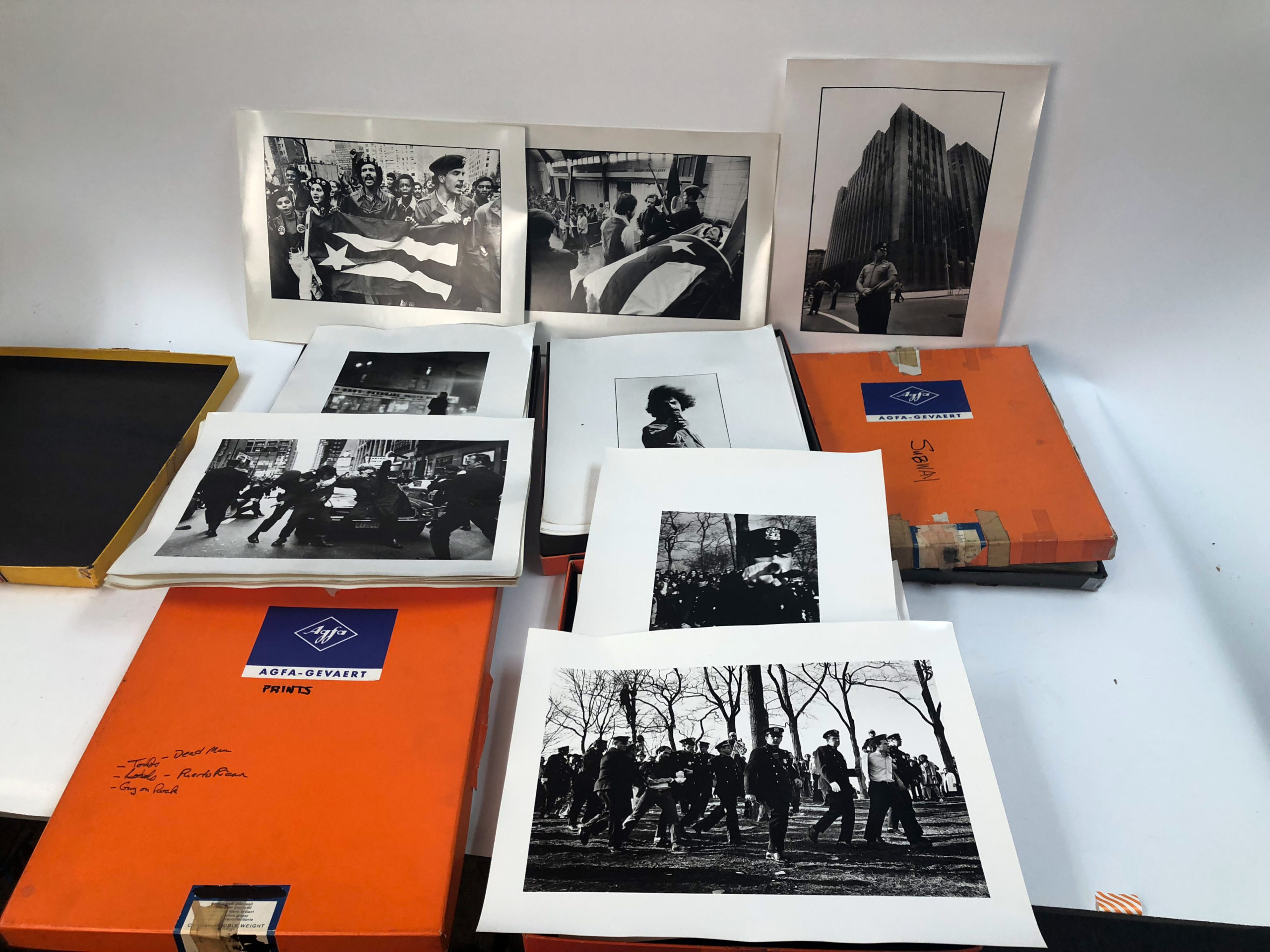 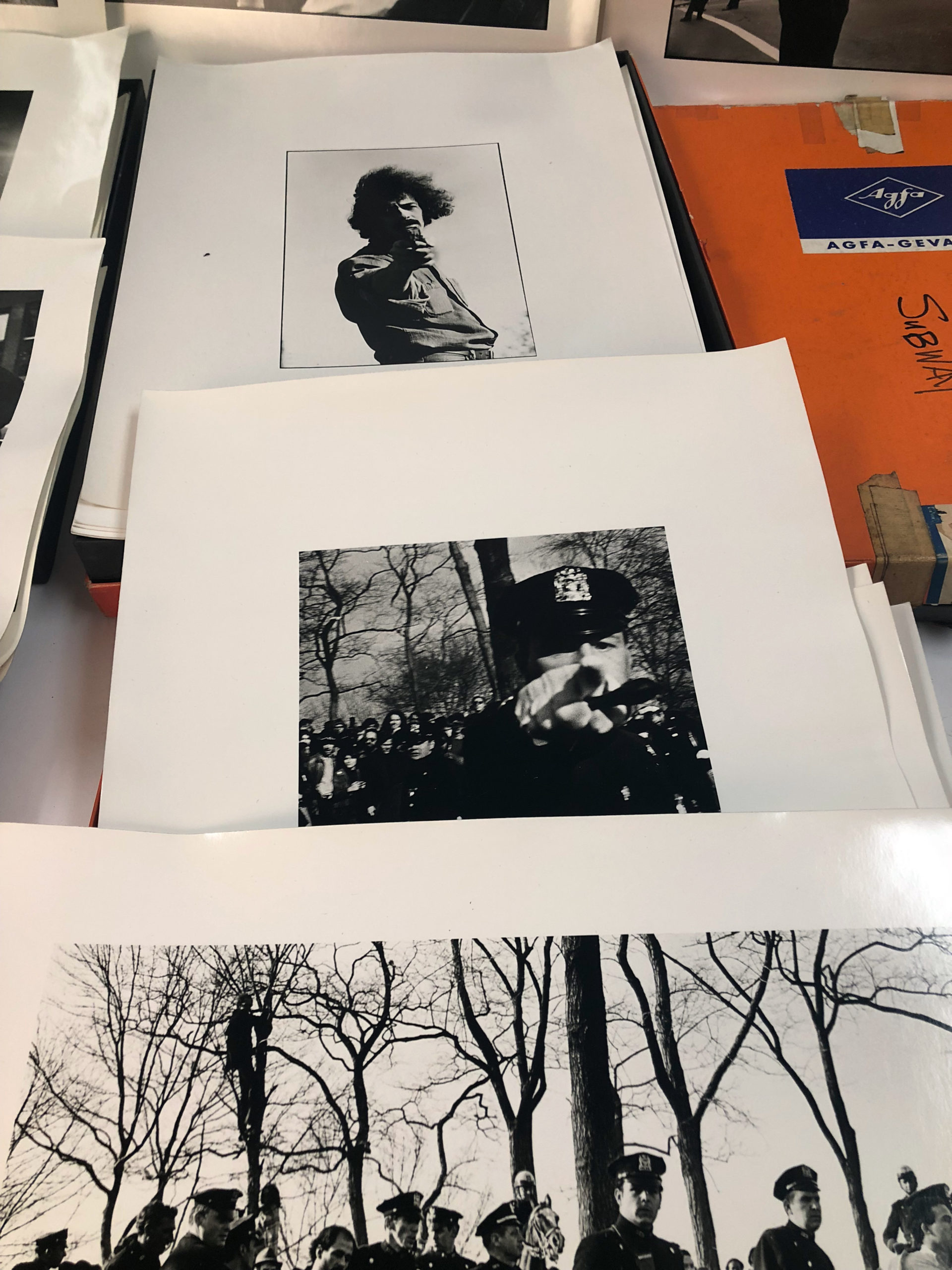 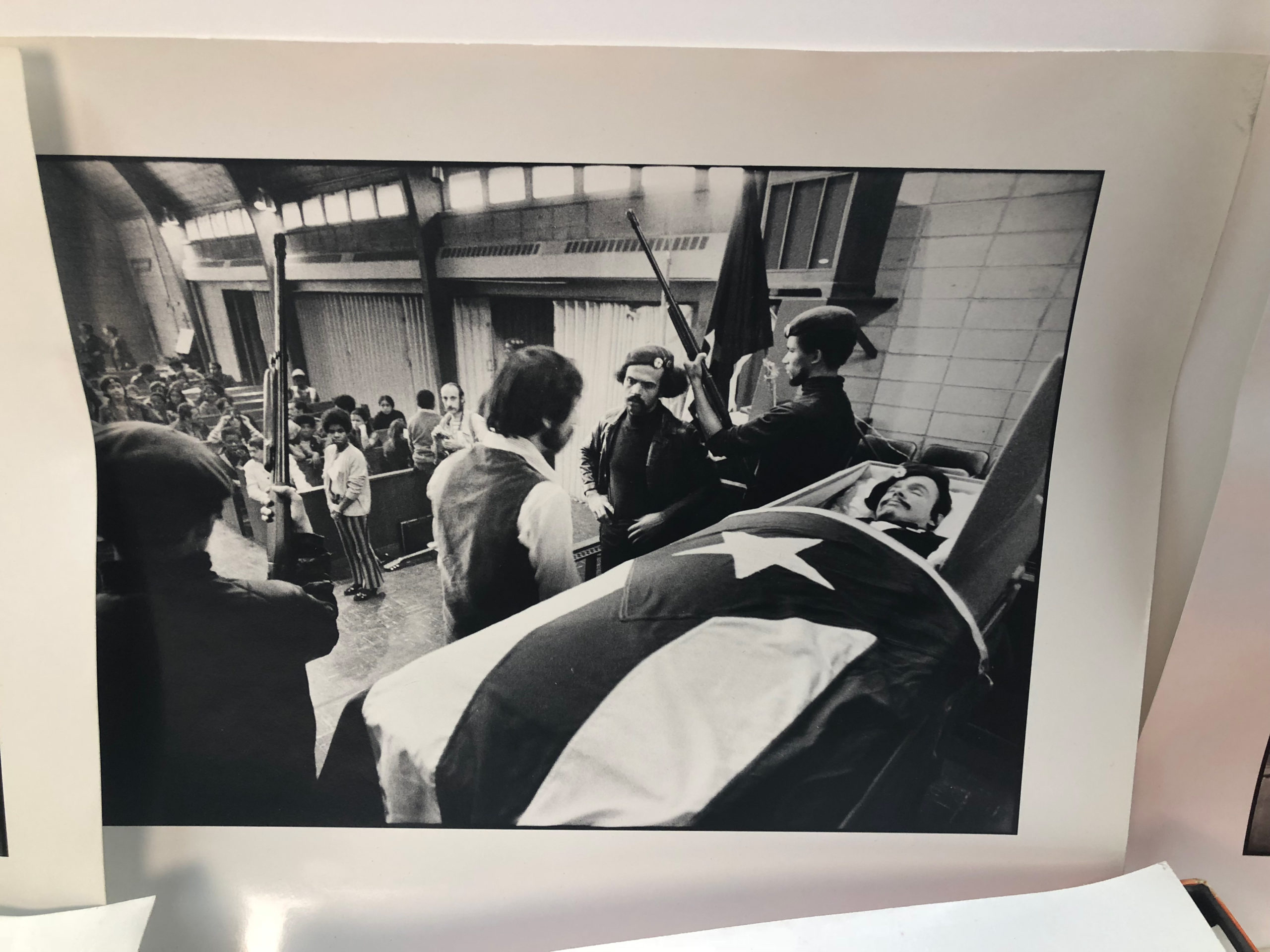 The 60s…I was just a kid. Confusing times. Three older brothers (10, 12 and 15 years older.) The oldest was a Marine. Naval Academy graduate. He went to Nam in ’66 and flew twin rotors helicopters. One was a rock and roll musician living in Greenwich Village and then Marin County California. The other was a very liberal college professor in Vermont. He’s in San Francisco now. His wife was a Planned Parenthood nurse. My dad was a doctor who had been called to active duty at age 59 because the Army was so short on doctors. He loved wearing his Colonel’s uniform.

I was unformed. Everyone was being battered by war and protest and social revolutions. Confusing times for a little kid.

But then there is always confusion. PF Sloane’s song Eve of Destruction sung by Barry McGuire came out in 1965. The Ballad of the Green Berets came out in January 1966. It was written and sung by Sgt Barry Sadler. Both songs could be released today with little change and draw on the same emotions.

In 1971 or ’72 my high school—Robert E Peary in Rockville—decided to march on the school board a few miles away. I think I was a sophomore. I have no idea now what we were protesting. Likely most of us didn’t then either. It was probably the idea of some of the SDS sympathizers who were seniors. Like most it was just a kind of (gentle) mob mentality. I tagged along with my Wonder Boy buddies just to see what would happen. Several hundred or more of us marched in a long line along the sidewalks to town. We passed the St Mary’s Catholic Church on the corner of Viers Mill Road and Rockville Pike where Zelda and F Scott Fitzgerald were buried.

No one bothered us or tried to stop us. I can’t remember what happened at the school board. At some point, the crowd broke up, and we all meandered back to school—or did we just go home? It was a bright sunny day. Great for playing hooky.

Nellie had boxes of ephemera too. Protest this. Rally here. What the Black Panthers do… 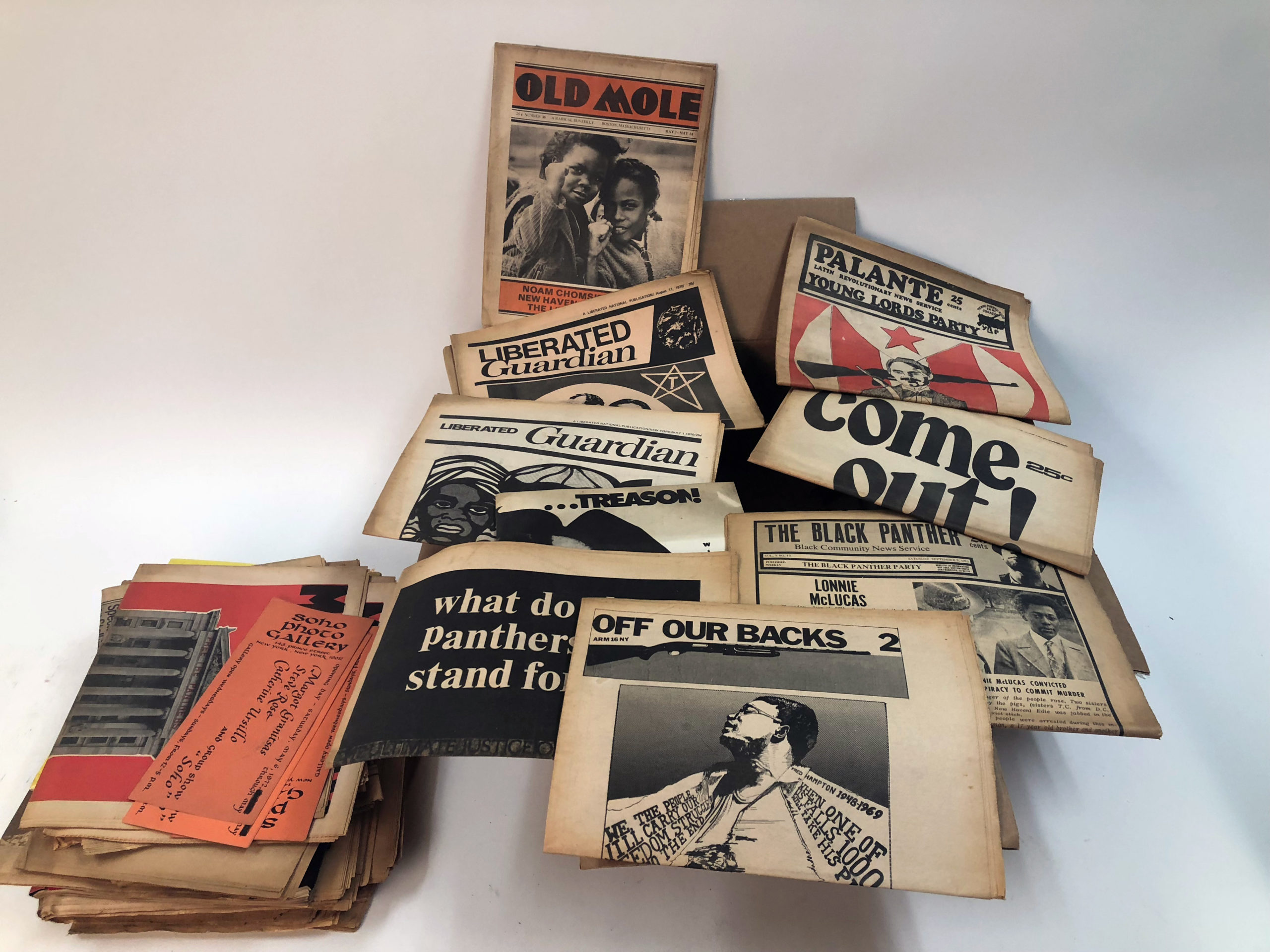 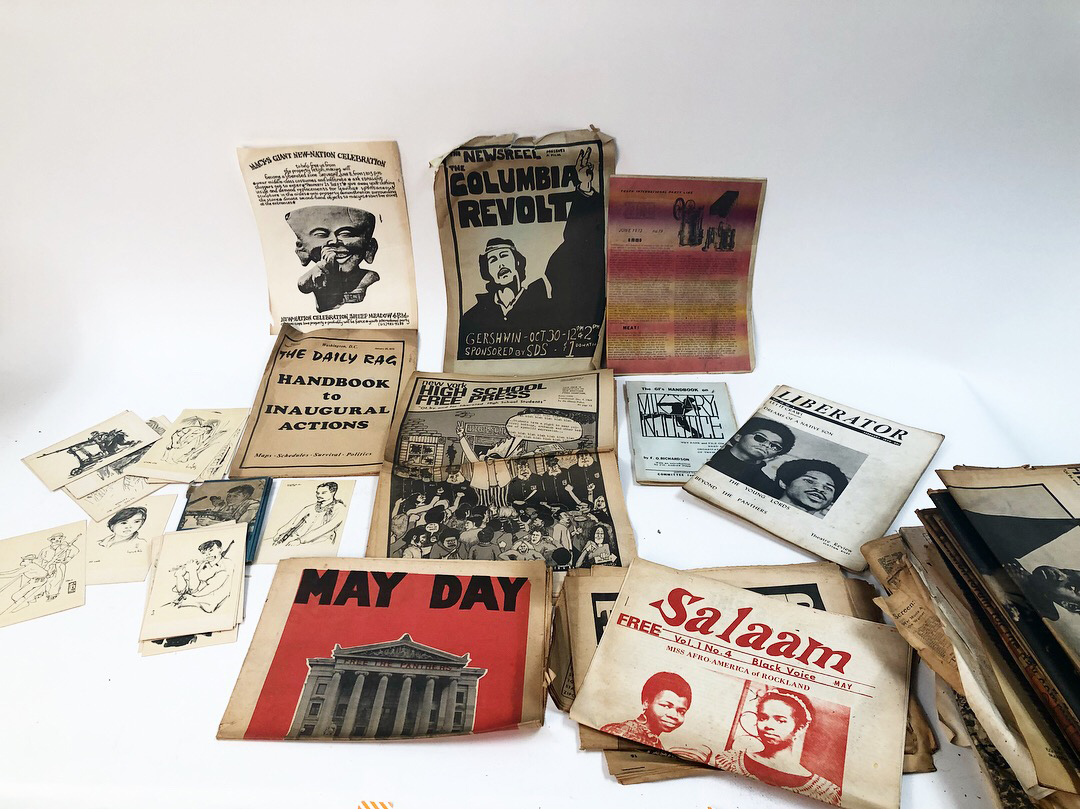 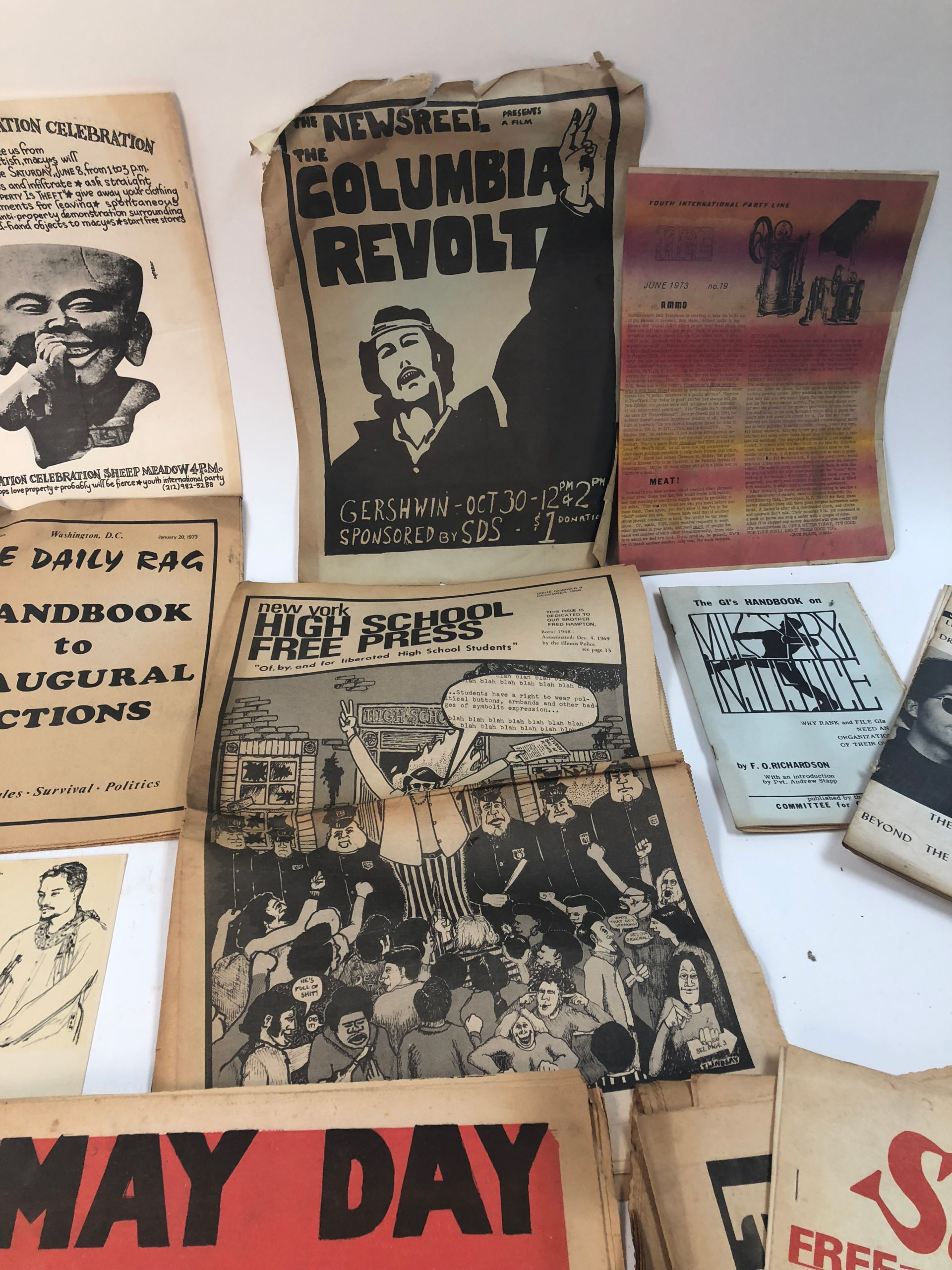 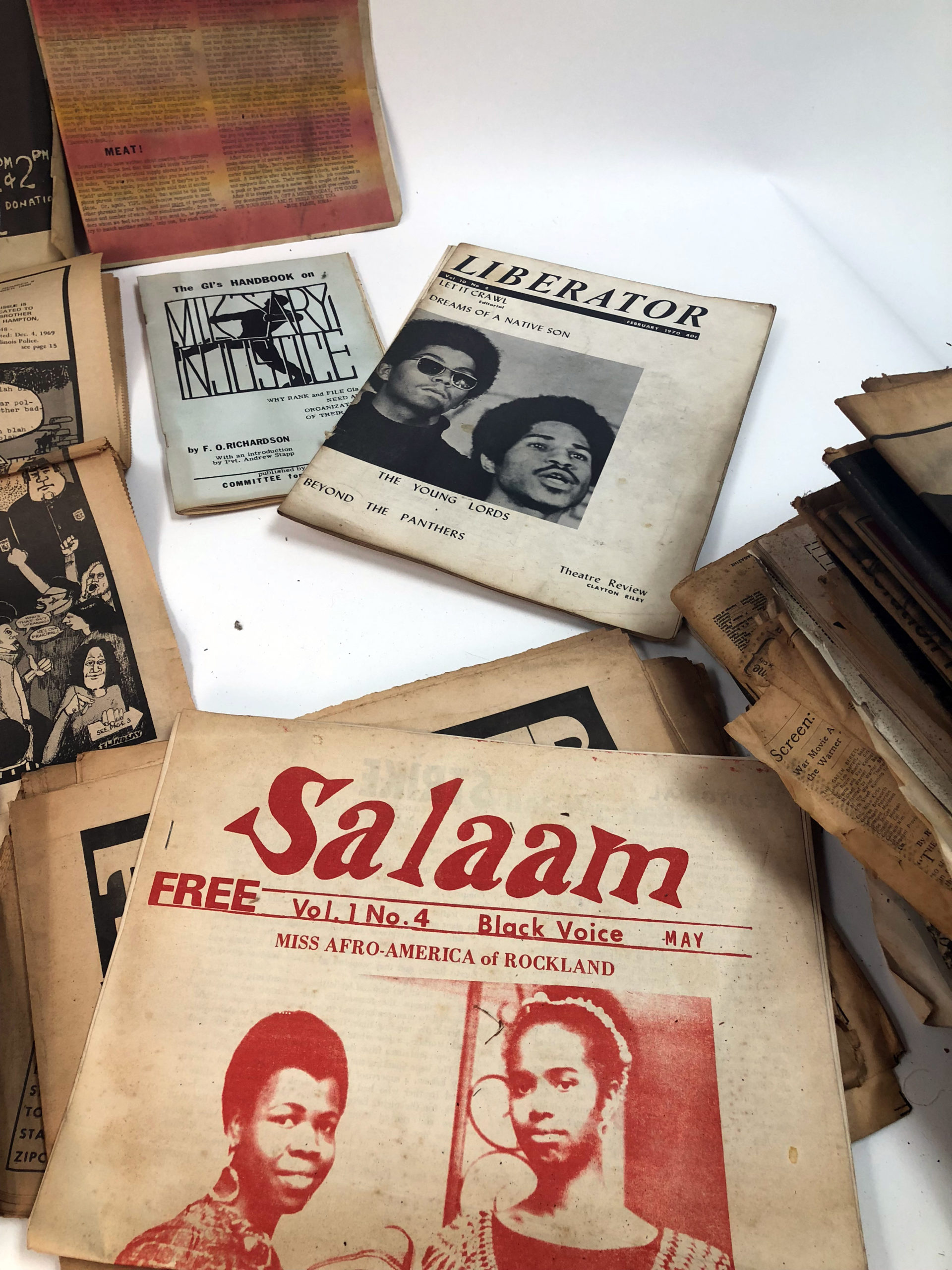 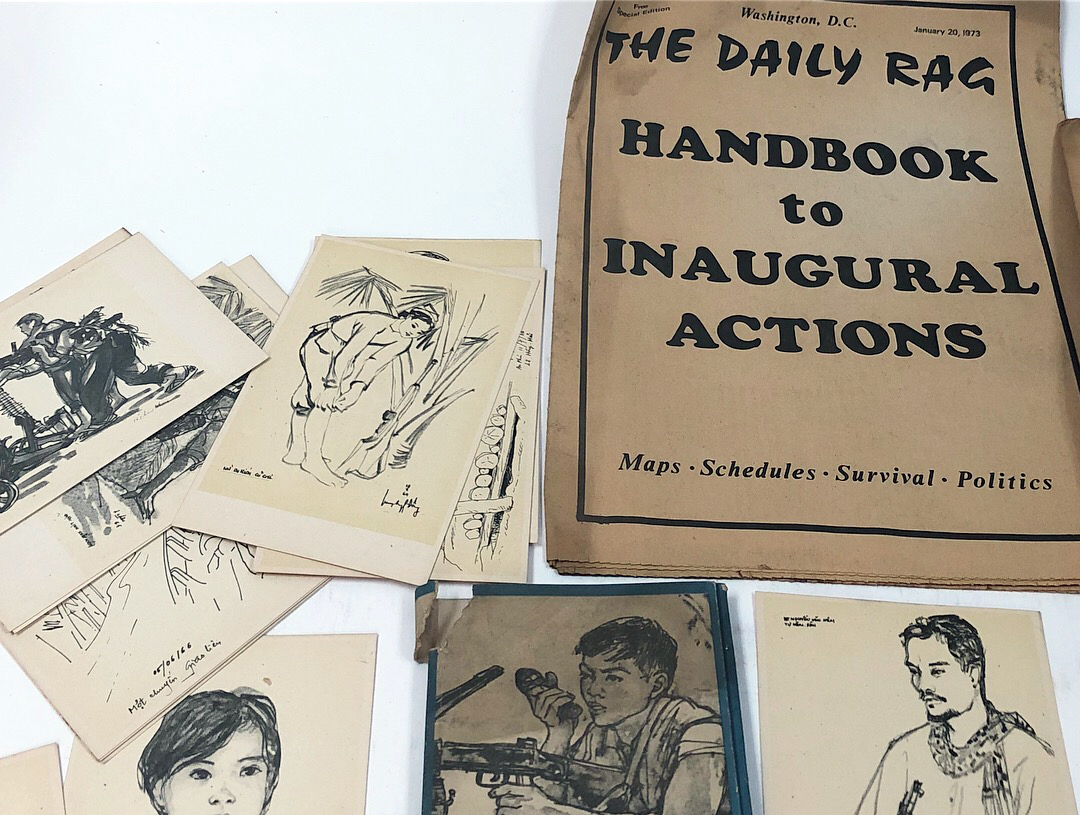 She slipped out three large original editorial cartoons from the 1940s. One depicted bombs falling on a Nazi swastika. 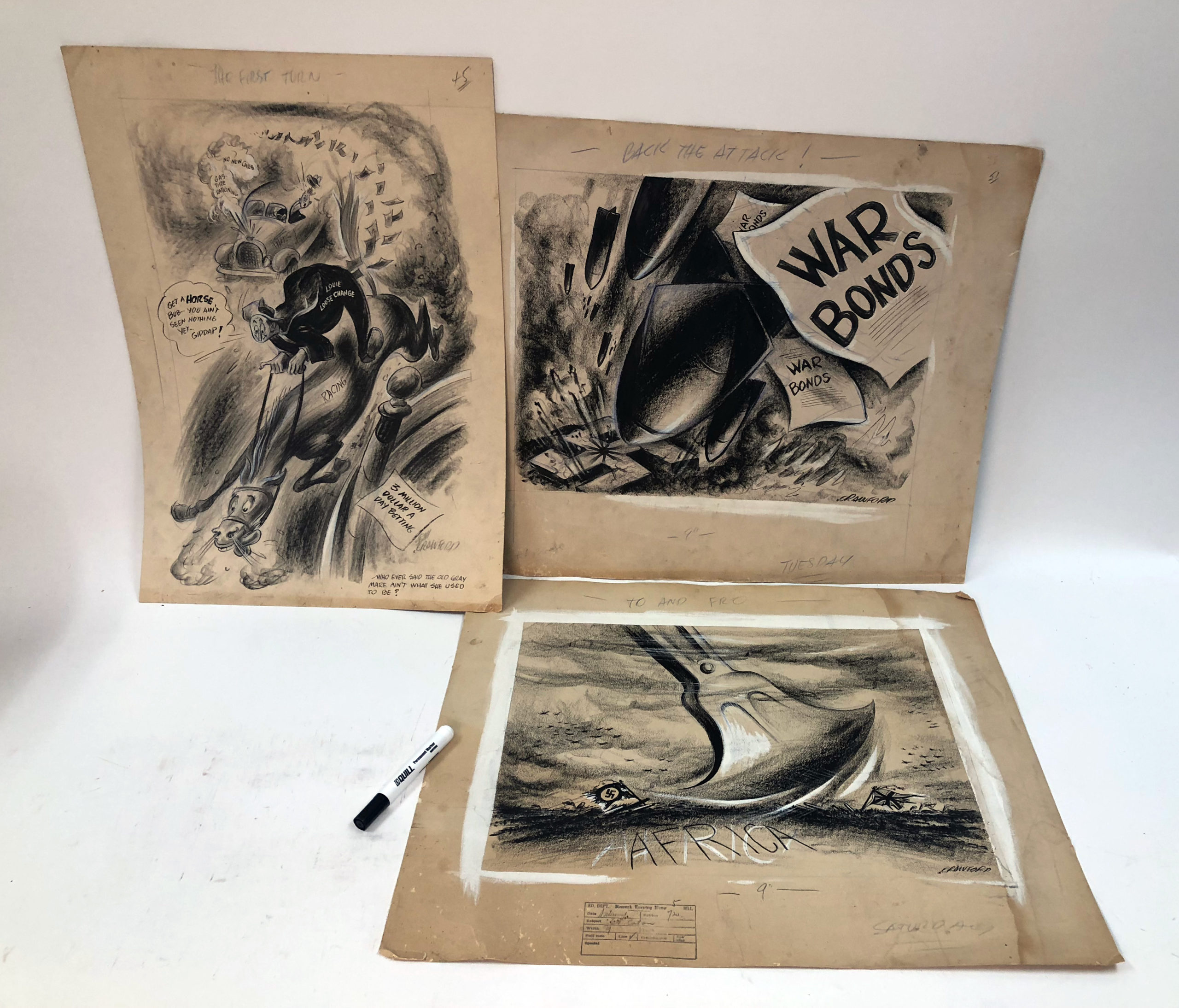 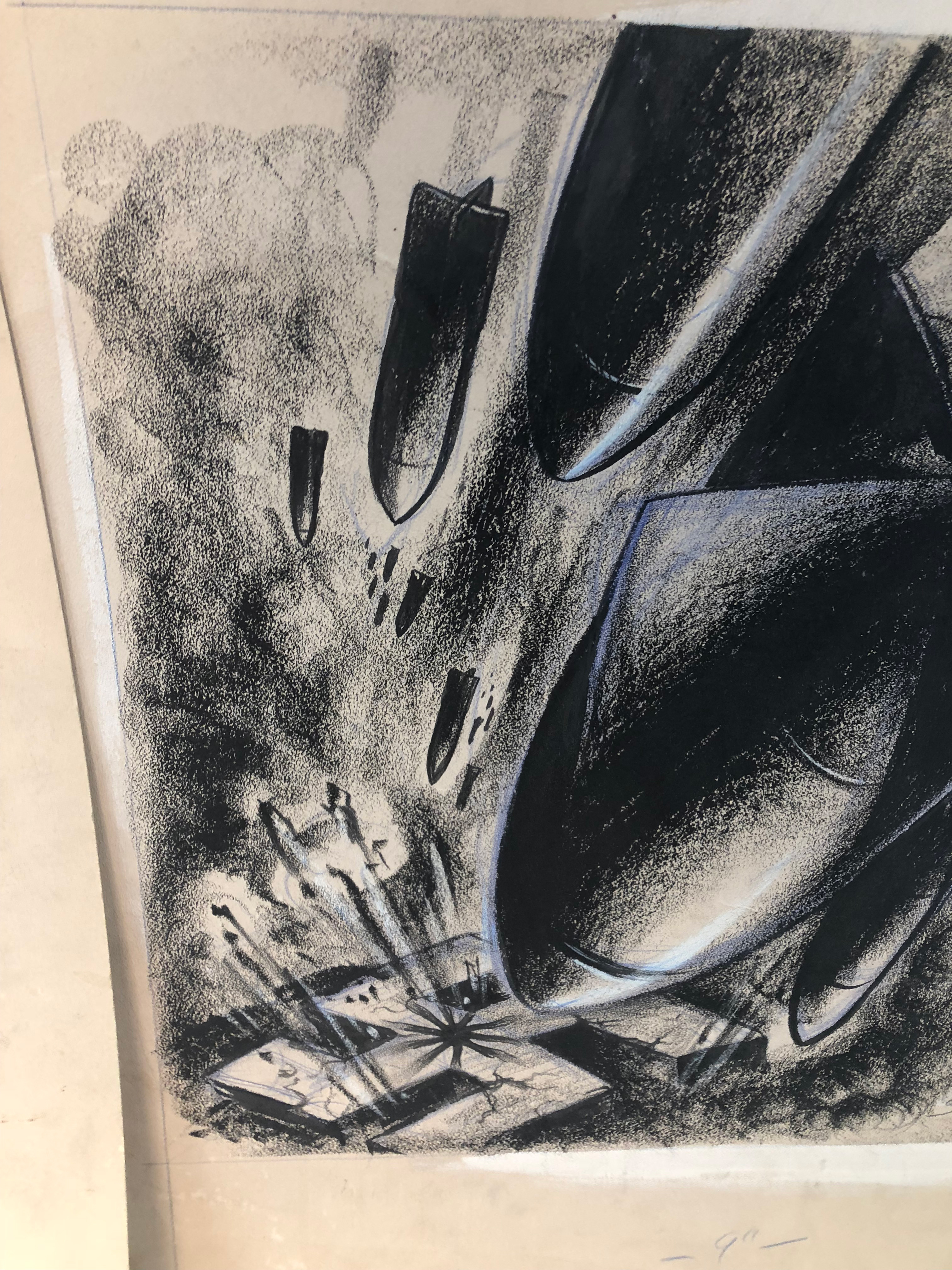 I paid her a lot, and she thanked me profusely. I’ll likely never see her again.

People enter and exit on the Wonder Book stage every day.

Nate had the box truck empty. I was the only one in the building who could drive it. We crossed town to our Frederick Maryland flagship store. I did a quick walk through and inspection of it while the truck was unloaded. We’d brought over about 40 boxes of books, LPs, DVDs, CDs. Bookstores always need fresh stock to keep the customers entertained (and the employees busy.)

We took the poor old decrepit 1997 Dodge van back to the warehouse. It was now about 3 pm. I could now begin my “getaway” day.

Somehow I did what needed to be done. The vans from Arlington got back around 4:30. I left for BWI airport around 6.

I’m now at the venerable Palmer House. I’ll send this off and head over to see what remains of the remainder business.

Here’s the rest of the Eve of Destruction:

Don’t you understand, what I’m trying to say?
And can’t you feel the fears I’m feeling today?
If the button is pushed, there’s no running away,
There’ll be no one to save with the world in a grave,
Take a look around you, boy, it’s bound to scare you, boy,
And you tell me over and over and over again my friend,
Ah, you don’t believe we’re on the eve of destruction.

Yeah, my blood’s so mad, feels like coagulatin’.
I’m sittin’ here, just contemplatin’.
I can’t twist the truth, it knows no regulation,
Handful of Senators don’t pass legislation,
And marches alone can’t bring integration,
When human respect is disintegratin’.
This whole crazy world is just too frustratin’.
And you tell me over and over and over again my friend,
Ah, you don’t believe we’re on the eve of destruction.

Think of all the hate there is in Red China!
Then take a look around to Selma, Alabama!
Ah, you may leave here, for four days in space,
But when your return, it’s the same old place,
The poundin’ of the drums, the pride and disgrace,
You can bury your dead, but don’t leave a trace,
Hate your next door neighbor, but don’t forget to say grace,
And you tell me over and over and over and over again my friend,
You don’t believe we’re on the eve of destruction.

No, no, you don’t believe we’re on the eve of destruction. 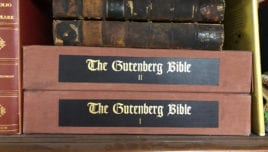 I think my first Florida Antiquarian Book Show was in March 1982. Was it their second year? 2020 will mark their 39th annual show... END_OF_DOCUMENT_TOKEN_TO_BE_REPLACED