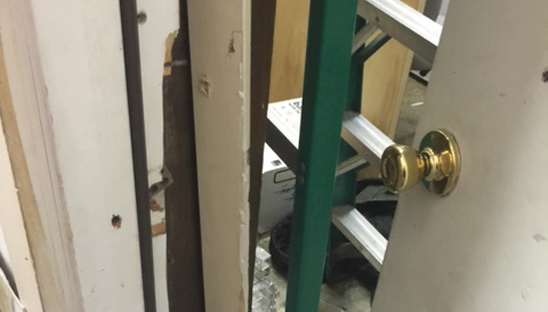 My iPhone started vibrating and playing church bells in bed next to me.

The phone glowed, its screen coming alive with the incoming call. I could find it easily in the dark that way.

My brother Jimmie, dead since 2002, would often drunk dial me at all hours. Since then, late night calls were rare.

If the phone had been in another room, I likely wouldn’t have taken the call. Whoever it was could leave a message.

(Why do I take the phone to bed with me? It’s become like a new appendage in recent years. I use it often for work purposes. It is useful for instant research, texting or emailing coworkers and clients. But it also sucks time and life away with pointless surfing of news sites and other “stuff.”)

I reached over and groggily picked it up.

“Hello, this is Atlantic Security. We are getting an alarm from your Dual Highway location. It shows a glass break at 2:53.”

These are always false alarms. Motion detectors are set off by a book slipping off a shelf. A strong wind rattles the doors, and the alarm equipment thinks it has been breached. Glass breaks? They can be triggered by a car backfiring or other loud noise near the building.

“Are the motion detectors going off? Has a door been opened?”

“Ok. It’s probably a false alarm. Ignore it. Call me back if there are any more alarms.”

I sat the phone down on the other side of the bed, resisting looking at emails or checking the Daily Mail or seeing if my Instagram posts have any interesting likes.

I curled up and tried to find sleep again. This was going to be a busy day. All the days are busy at Wonder Book. Plus I had tickets for The Who that evening in DC. I’d rarely gone to concerts even as a kid. For some reason, I was on a mission to see opera, plays, ballet, and music concerts in 2015 and 2016.

I’d barely closed my eyes and taken a deep breath before the phone went off again:

“Hello, this is Atlantic Security again. We have several motion detector alarms…”

“There’s somebody in there. Call the police.”

I gruffly awoke Merry and Pip.

I shook out the cobwebs as I escorted them to their pen with food and water.

I got dressed in sweats, got in the Jeep and bounced down the mountain.

There’s no fast way to Hagerstown from where I live. There’s a mountain range, actually two, between us. So, I drove south some miles until I hit Interstate 70 which travels west over both ranges through mountain passes and deep road cuts.

When I pulled up to the Hagerstown store, there were two cop cars, 4 policeman and a big German Shepherd standing the parking lot. 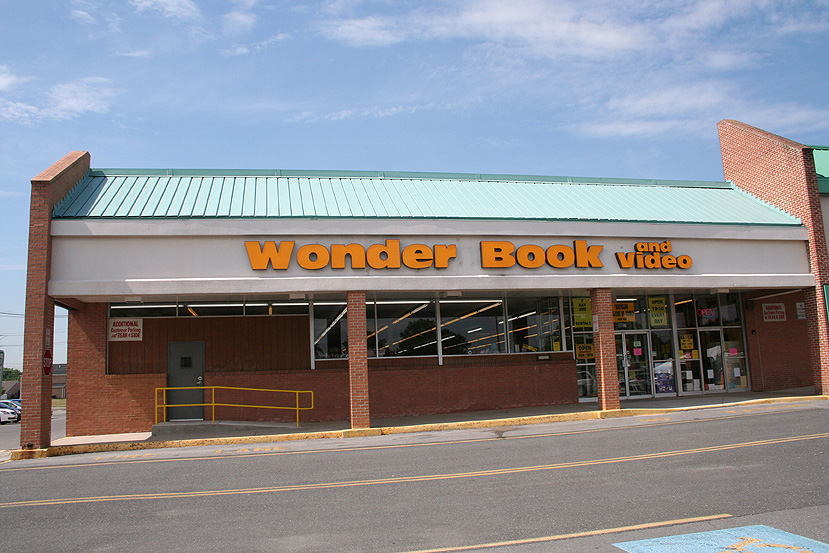 I got out of Jeep and introduced myself.

“We got him. Couldn’t find him at first. He climbed up into the ceiling. When Rex got here (he indicated the dog), he went right to the spot. The kid came right on down when he heard the growls. Kid was a mess. All bloody.”

They were clearly pretty happy and pleased with themselves. I guess the success rate of catching someone in the act isn’t that great.

They asked me to go in and assess the damage and see if anything was missing.

The front door was shattered. The crook had tossed a big chunk of concrete through it. 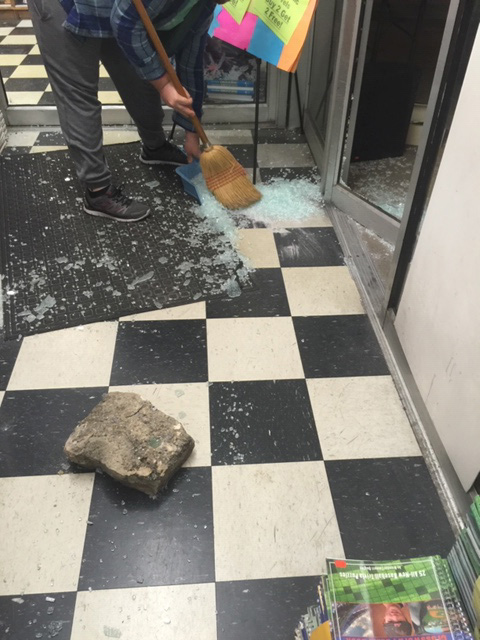 So, there was indeed a glass break.

The door alarm never went off because the door was never opened. He just went through the glassless doorframe. 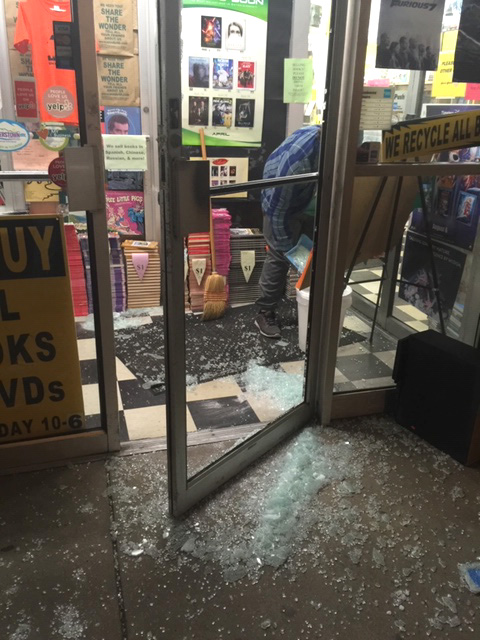 Two of the cops led me through the store. Piles of books were knocked over, but it wasn’t too much of a mess. That is, until we got back to the bathroom. The guy had gone berserk in there. Maybe he was all drugged up. Maybe he panicked when heard the sirens outside. Maybe he was angry he hadn’t found the office where the money was (locked up.)

The mirror and lights were busted. Debris was all over the floor.

“He got back here and went berserk. This is where the dog found him. He had climbed on the sink and pulled himself up into the drop ceiling.”

There was also a lot of blood all over the bathroom. 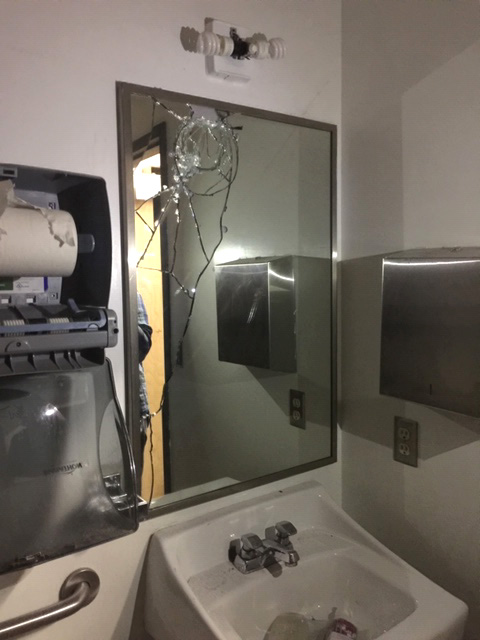 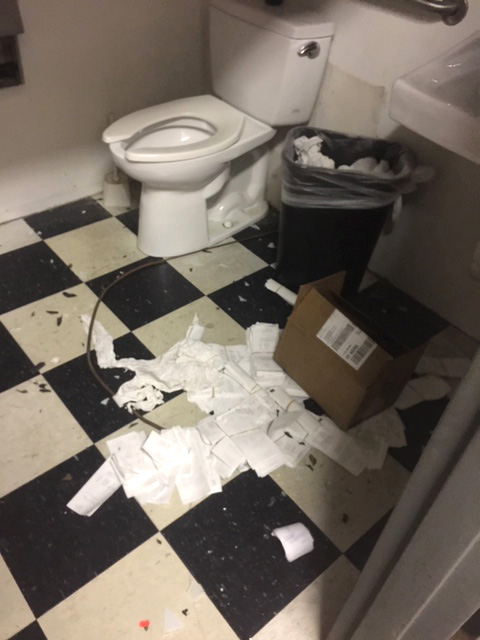 The police took my info and left. It was now about 6am and still dark.

I called the store manager and asked if he could come in ASAP. We needed to clean up before the store opened at 10.

When he got in, I went and got gloves and cleanser and donuts and coffee.

He called another employee, and we spent the morning sweeping up glass, picking up books and cleaning the bathroom.

I was there until about noon. I had to find a glass door company and get someone who could fix the lights and mirror and busted doorframe.

I wondered about the kid who had had a much worse morning than I. He had to have been nuts to choose a used bookstore as a target.

I went home and showered and got ready for the regular day…and The Who concert that night.

The show was great. Old guys rocking and rolling in their 70s.

We figured up all the costs of the damages and submitted it to the police. I doubted Wonder Book would ever see restitution. I’m not sure if that ever happens. Well, we did get paid back another time after a large embezzlement. But about a year later, I received a summons to the trial. I arrived in jacket and tie. I was sent down a hallway full of sad tragic looking people. I have no idea if my guy was among them. I was sent to the DA’s area and introduced myself. I had my notes and receipts.

“We got a check for you. The grandparents are paying. Part of the plea deal.”

I was handed a certified check for several thousand dollars. We had broken even financially.

I got nothing for pain and suffering and having to drag myself out of bed well before dawn.

I hope the kid got his act together.

We’ve been very lucky. We’ve had plenty of shoplifters and a few crooks working for us but, knock on wood, nothing terrifying.

Everyone knows there’s not much money in used books! 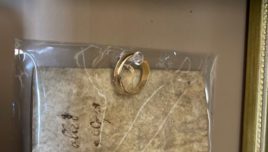 Mathilda bounded into the bookseller's office. She leapt upon the desk, and papers scattered into the man's lap... END_OF_DOCUMENT_TOKEN_TO_BE_REPLACED