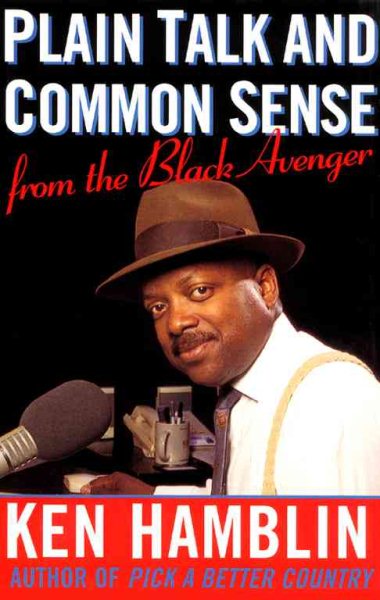 A popular Black radio commentator offers his honest opinions about the state of America Read More
Ken Hamblin is one of the most popular radio talk-show hosts in America. With a daily audience of millions, Hamblin likes to say that he uses ideas to change the world. And his listeners have always loved his commonsense approach to the many political and social issues that are addressed on his show every day. Hamblin is also a prolific writer; his column appears weekly in the Denver Post and is nationally syndicated. In Plain Talk and Common Sense from the Black Avenger, Hamblin has collected his best pieces, and they offer quite a compelling -- and sometimes controversial -- look at the recent issues that have Americans talking and debating. From personalities like Bill Clinton, O.J. Simpson and Monica Lewinsky to issues like affirmative action, gun control, crime and capital punishment, Hamblin brings his unique, clear-eyed and at times firebrand logic and vision to the problems and situations that arise on our landscape. Whether he is speculating on how feminism might have created a Monica Lewinsky or taking a pro-choice stance against most conservative thinkers' views, what Hamblin brings out most poignantly is a brash belief in America -- a patriot's belief that the dream is alive and well, though at times under assault from both ends of the spectrum. Plain Talk and Common Sense from the Black Avenger is vintage Hamblin. His take on what matters to millions in America today is thought-provoking and eloquent, yet delivered in a language that most people understand. That kind of speaking is exactly what makes Hamblin such a joy to his millions of fans and what makes this book such a provocative experience. Read Less

PICK A BETTER COUNTRY: An Unassuming Colored Guy Speaks His...

An Introduction to Anthropology Volume 2 Ethnology