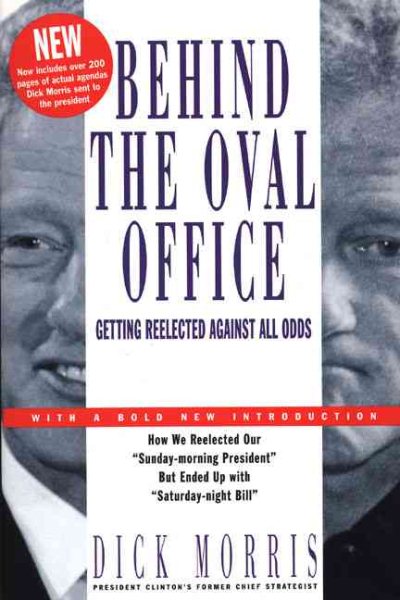 President Clinton's former campaign strategist describes his relationship with the president and offers a behind-the-scenes look at how the reelection strategy was formulated Read More
This new edition of Behind the Oval Office contains an insightful an devastating new interpretation of President Clinton's character and career. Also included are actual agendas Dick Morris used for his briefing sessions with the president. The Justice Department subpoenaed them during its investigation of the president. Kenneth Starr used them to build his case. Now released to the public for the first time, these remarkable sources provide a rare inside look into White House meetings. The agendas are a virtual diary of how Morris, armed with his polling data, helped Clinton outmaneuver his adversaries and overcome his mistakes-creating policy as a potent cocktail of ideals, opportunities, marketing strategies, and aspirations sold to the public in brilliant advertising campaigns. Read Less

Goodreads reviews for Behind the Oval Office: Getting Reelected Against All Odds