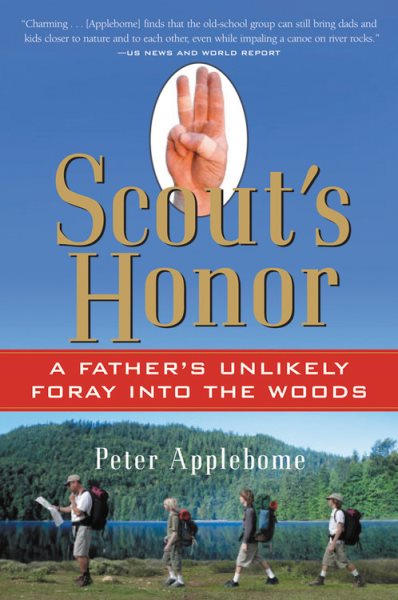 A committed "indoorsman" chronicles his adventures with his son's Boy Scout troop as they head outdoors for a series of hilarious adventures hiking and camping. Reprint. 35,000 first printing. Read More
Peter Applebome grew up obsessed by box scores, so when his son, Ben, joined Little League he happily assumed he'd be spending Ben's childhood at the ballfield. But what Ben really liked was hiking and camping-and when he joined the local Scout troop Applebome reluctantly went along for the ride. As someone who had never made a fire except in a gas grill and tied knots only in his shoelaces, Applebome was an unlikely recruit. Taking us from the low points to the unexpected triumphs and through all the trekorees and derbies in between, Applebome hikes the trail from tenderfoot skeptic to proud Scout dad. Offering affectionate portraits of the motley group of boys in the troop, he also laces his very funny narrative with an informal but fascinating history of Scouting and grapples with the modern-day controversies that will help determine Scouting's future. Read Less

Goodreads reviews for Scout's Honor: A Father's Unlikely Foray into the Woods