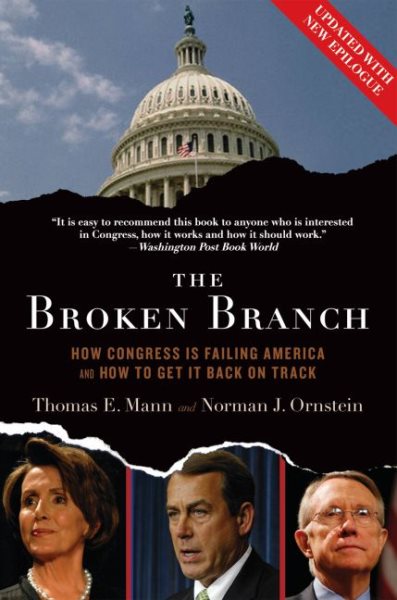 Two nationally renowned congressional scholars review the evolution of Congress from the early days of the republic to 2006, arguing that extreme partisanship and a disregard for institutional procedures are responsible for the institution's current state of dysfunction. Read More
The Broken Branch offers both a brilliant diagnosis of the cause of Congressional decline and a much-needed blueprint for change, from two experts who understand politics and revere our institutions, but believe that Congress has become deeply dysfunctional. Mann and Ornstein, two of the nation's most renowned and judicious scholars of government and politics, bring to light the historical roots of Congress's current maladies, examining 40 years of uninterrupted Democratic control of the House and the stunning midterm election victory of 1994 that propelled Republicans into the majority in both House and Senate. The byproduct of that long and grueling but ultimately successful Republican campaign, the authors reveal, was a weakened institution bitterly divided between the parties. They highlight the dramatic shift in Congress from a highly decentralized, committee-based institution into a much more regimented one in which party increasingly trumps committee. The resultant changes in the policy process--the demise of regular order, the decline of deliberation, and the weakening of our system of checks and balances--have all compromised the role of Congress in the American Constitutional system. From tax cuts to the war against Saddam Hussein to a Medicare prescription drug benefit, the Legislative process has been bent to serve immediate presidential interests and have often resulted in poorly crafted and stealthily passed laws. Strong majority leadership in Congress, the authors conclude, led not to a vigorous exertion of congressional authority but to a general passivity in the face of executive power. Read Less

Goodreads reviews for The Broken Branch: How Congress Is Failing America and How to Get It Back on Track (Institutions of American Democracy)

One Nation After Trump: A Guide for the Perplexed, the Disil...

It's Even Worse Than It Looks: How the American Constitution...

One Nation After Trump: A Guide for the Perplexed, the Disil...