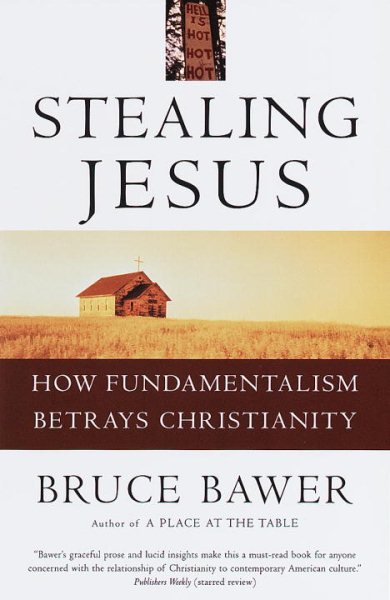 Explores the dangerous influence of fundamentalism on Christianity, explaining how the emphasis on judgment and lack of compassion and understanding are at odds with the teaching of Christ Read More
From the author of the widely acclaimed A Place at the Table, this is a major work, passionately outspoken and cogently reasoned, that exposes the great danger posed to Christianity today by fundamentalism.The time is past, says Bruce Bawer, when denominational names and other traditional labels provided an accurate reflection of Christian America's religious beliefs and practices. The meaningful distinction today is not between Protestant and Catholic, or Baptist and Episcopalian, but rather between "legalistic" and "nonlegalistic" religion, between the Church of Law and the Church of Love. On one side is the fundamentalist right, which draws a sharp distinction between "saved" and "unsaved" and worships a God of wrath and judgment; on the other are more mainstream Christians who view all humankind as children of a loving God who calls them to break down barriers of hate, prejudice, and distrust.Pointing out that the supposedly "traditional" beliefs of American fundamentalism--about which most mainstream Christians, clergy included, know shockingly little--are in fact of relatively recent origin, are distinctively American in many ways, and are dramatically at odds with the values that Jesus actually spread, Bawer fascinatingly demonstrates the way in which these beliefs have increasingly come to supplant genuinely fundamental Christian tenets in the American church and to become synonymous with Christianity in the minds of many people.Stealing Jesus is the ringing testament of a man who is equally disturbed by the notion of an America without Christianity and the notion of an American Christianity without love and compassion. Read Less

Place at the Table: The Gay Individual in American Society