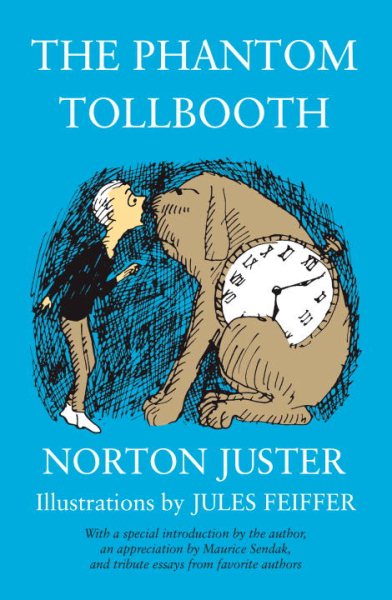 Discovering a large toy tollbooth in his room, bored ten-year-old Milo drives through the tollbooth's gates and begins a memorable journey to the Kingdom of Wisdom with a watchdog named Tuck. Tour. Read More
With almost 4 million copies sold over 50 years after its original publication, generations of readers have now journeyed with Milo to the Lands Beyond in this beloved classic that Philip Pullman says &apos;comes up bright and new every time I read it . . . it will continue to charm and delight for a very long time yet. And teach us some wisdom, too.&apos; Enriched by Jules Feiffer&apos;s splendid illustrations, the wit, wisdom, and wordplay of Norton Juster&apos;s offbeat fantasy are as beguiling as ever.   For Milo, everything&apos;s a bore. When a tollbooth mysteriously appears in his room, he drives through only because he&apos;s got nothing better to do. But on the other side, things seem different. Milo visits the Island of Conclusions (you get there by jumping), learns about time from a ticking watchdog named Tock, and even embarks on a quest to rescue Rhyme and Reason. Somewhere along the way, Milo realizes something astonishing. Life is far from dull. In fact, it&apos;s exciting beyond his wildest dreams! Read Less

Goodreads reviews for The Phantom Tollbooth

The Dot and the Line: A Romance in Lower Mathematics