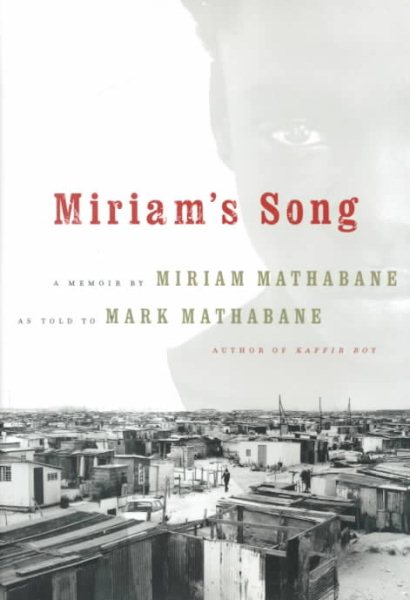 Relates the story of a woman who came of age amid the violence of South Africa in the 1980s and finally saw the destruction of apartheid and the birth of a democratic nation Read More
The powerful memoir of a young black woman coming of age in South Africa amid the violence of apartheid, beautifully written by her brother, the bestselling author of Kaffir Boy. Mark Mathabane first came to prominence with the publication of Kaffir Boy, which became a New York Times bestseller. His story of growing up in South Africa was one of the most riveting accounts of life under apartheid. Mathabane's newest book, Miriam's Song, is the story of Mark's sister, who was left behind in South Africa. It is the gripping tale of a woman -- representative of an entire generation -- who came of age amid the violence and rebellion of the 1980s and finally saw the destruction of apartheid and the birth of a new and democratic South Africa. Mathabane writes in Miriam's voice, based on stories she told him, but he has re-created her unforgettable experience as only someone who also lived through it could. The immediacy of the hardships that brother and sister endured -- from daily school beatings to near-overwhelming poverty -- is balanced by the beauty of their childhood observations and the true affection that they have for each other. Miriam emerges as both an innocent child drawn into the war against apartheid and a strong woman forever changed by the struggles, brutality, and politics of the world around her; Mark emerges once more as a writer of extraordinary ability, sensitivity, and insight. Miriam's Song is memoir writing at its finest. With its courage, determination, resilience, hope, and faith, it is a truly inspirational story, spectacularly told. Read Less

Kaffir Boy: An Autobiography--The True Story of a Black Yout...