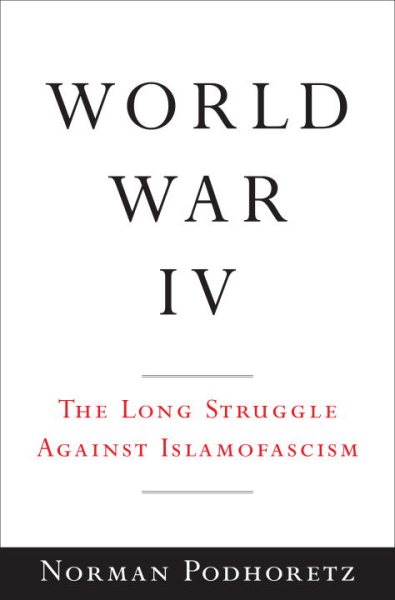 A leading conservative thinker discusses the war against the global terrorist network, arguing that this is a legitimate and essential battle while defending the Bush administration's policies, and examines the threat of Islamic extremists to world peace. Read More
For almost half a century—as a magazine editor and as the author of numerous bestselling books and hundreds of articles—Norman Podhoretz has helped drive the central political and intellectual debates in this country. Now, in this beautifully written and powerfully argued book, he takes on the most controversial issue of our time—the war against the global network of terrorists that attacked us on 9/11. In World War IV, Podhoretz makes the first serious effort to set 9/11 itself, the battles that have followed it in Afghanistan and Iraq, and the war of ideas that it has provoked at home into a broad historical context. Through a brilliant telling of this epic story, Podhoretz shows that the global war against Islamofascism is as vital and necessary as the two world wars and the cold war (“World War III”) by which it was preceded. He also lays out a compelling case in defense of the Bush Doctrine, contending that its new military strategy of preemption and its new political strategy of democratization represent the only viable way to fight and win the special kind of war into which we were suddenly plunged. Different in certain respects though the Islamofascists are from their totalitarian predecessors, this new enemy is equally dedicated to the destruction of the freedoms for which America stands and by which it lives. But it took the blatant aggression of 9/11 to make most Americans realize that war had long since been declared on us and that the time had come to fight back. Past administrations, both Republican and Democratic, had failed to respond with appropriate force to attacks by Muslim terrorists on American citizens in various countries, and even the bombing of the World Trade Center in 1993 was treated as a criminal act rather than an act of war. All this changed after 9/11, when the whole country rallied around President Bush’s decision to bring the war to the enemy’s home ground in the Middle East. The successes and the setbacks that have followed are vividly portrayed by Podhoretz, who goes on to argue that, just as in the two great struggles against totalitarianism in the twentieth century, the key to victory in World War IV will be a willingness to endure occasional reverses without losing sight of what we are fighting against, what we are fighting for, and why we have to win. Read Less

Why Are Jews Liberals?

Why We Were In Vietnam

The Prophets: Who They Were, What They Are