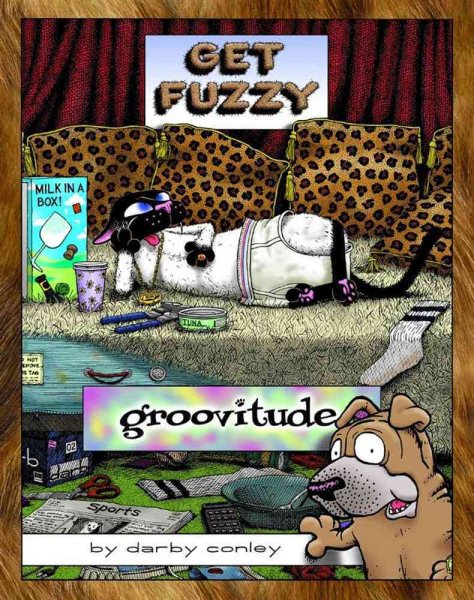 Follows Bucky the cat, Satchel the dog, and their human companion, Rob, as they deal with advertising slogans, diet food, mice, Christmas, dating, and credit cards. Read More
Debuting in 1999, Get Fuzzy has rocketed to the top of the charts. Get Fuzzy has become a hit cartoon with its bitingly funny portrait of single life with pets.And why not? The laughs come fast and furious. Get Fuzzy features Rob Wilco, a single, mild-mannered advertising executive who&#39;s the so-called guardian of Bucky and Satchel, anthropomorphic scamps that still live by their animal instincts. Bucky, a temperamental cat who carries a boom box and goes on spending sprees, definitely calls the shots in this eclectic household, while Satchel is a kindly canine with a sensitive soul who tries to remain neutral, even though he bears the brunt of his feline companion&#39;s mischief.Between the three of them, the Wilco household faces a whole host of trials and tribulations that classify them as family. Satchel wants his boundaries respected. Bucky refuses to eat vegetables but insists on snarfing up Rob&#39;s plants. Rob tries to meet women, but his pets continually subvert his efforts. In every frame, Get Fuzzy depicts the hilarious war between the species, giving the animals an equal footing in hilarious one-upmanship.Get Fuzzy is the comic strip for everyone who loves their pets with an attitude. That said, Groovitude is Get Fuzzy at its finest.Contains cartoons from The Dog Is Not a Toy and Fuzzy Logic. Read Less

Goodreads reviews for Groovitude: A Get Fuzzy Treasury (Volume 3)

Say Cheesy: A Get Fuzzy Collection

I'm Ready for My Movie Contract: A Get Fuzzy Collection (Vol...

Blueprint for Disaster: A Get Fuzzy Collection (Volume 5)