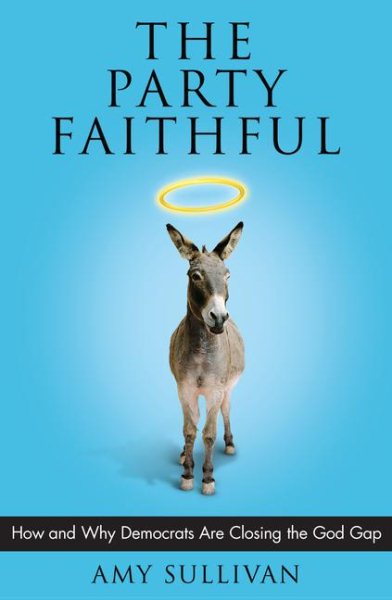 An assessment of the Democratic Party's separation from faith-based agendas identifies its past alliances with church leaders and historical role in social justice movements, citing new initiatives that are changing the party's stance on religion and morality. Read More
As late as the 1960s, religion was a decidedly nonpartisan affair in the United States. In the past forty years, however, despite abundant evidence that Americans care about their candidates' personal faith, Democrats have beat a retreat in the competition for religious voters and the discussion of morality, effectively ceding religion to the Republicans. Elections show that voters have gotten the message: Democrats are on the wrong side of the God gap. With unprecedented access to politicians, campaign advisers, and religious leaders, Amy Sullivan skillfully traces the Democratic Party's fall from grace among religious voters, showing how the party lost its primacy -- and maybe its soul -- in the process. It's a story that begins with the party's ineffectual response to the rise of the religious right and culminates with John Kerry's defeat in the 2004 presidential election. Sullivan documents key turning points along the way, such as the party's alienation of Catholics on the abortion issue and its failure to emulate Bill Clinton's success at reaching religious voters. She demonstrates that there was nothing inevitable about the defection of values voters to the GOP and the emergence of the God gap: it was not just a Republican achievement but the Democrats' failure to embrace their own faith and engage religious Americans on social issues. Sullivan's story has a hopeful ending. She takes readers behind the scenes of the Democrats' recent religious turnaround. She offers insight into the ways Democrats have reoriented their campaigns to appeal to religious voters -- including their successes at framing the abortion issue in less-divisive terms and at finding common ground with evangelical leaders and communities. Timely, informative, and immensely thought-provoking, The Party Faithful is a tough and revealing analysis of the Democratic Party's relationship to religion and an essential primer for evaluating the outcome of the 2008 presidential election. Read Less

Goodreads reviews for The Party Faithful: How and Why Democrats Are Closing the God Gap

The Motivation Breakthrough: 6 Secrets to Turning On the Tun...