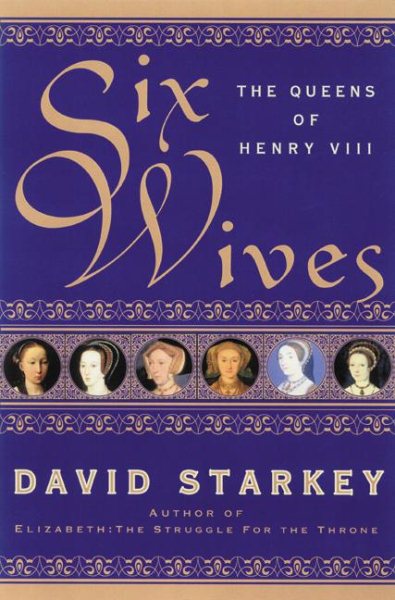 Profiles the six marriages of King Henry VIII against the political drama of the Tudor era, tracing his twenty-four-year first marriage to Catherine of Aragon and subsequent whirlwind decade of new brides. Read More
No one in history had a more eventful career in matrimony than Henry VIII. His marriages were daring and tumultuous, and made instant legends of six very different women. What could make him marry six times? In this remarkable new study, David Starkey argues that the king was not a depraved philanderer, but someone seeking happiness -- and a son. Knowingly or not, he empowered a group of women to extraordinary heights and changed the way a nation was governed.Henry took his first bride, Catherine of Aragon, when he was seventeen. They lasted twenty-four years together, but Catherine suffered through many miscarriages and failed to produce a male heir. Henry then fell in love with Anne Boleyn, the mother of Elizabeth I. Their relationship transformed England forever, but Henry had Anne beheaded and married his next wife, Jane Seymour, on the very day of Anne's execution. At last, Seymour gave birth to Henry's longed-for son, Edward VI. What followed was a farcical beauty contest which ended in the King's brief marriage to the "mare of Flanders," Anne of Cleves. Finally, there were the two Catherines: Catherine Howard, the flirtatious teenager whose adulteries made a fool of the aging king and who was the second bride to lose her head; and Catherine Parr, the shrewd, religiously radical bluestocking who outlived him.Six Wives is a masterful work of history that intimately examines the rituals of diplomacy, marriage, pregnancy and religion that were part of daily life for women at the Tudor Court. Weaving new facts and fresh interpretations into a spellbinding account of the emotional drama surrounding Henry's six marriages, David Starkey reveals the central role that the queens played in determining policy. With an equally keen eye for romantic and political intrigue, he brilliantly recaptures the story of Henry's wives and the England they ruled. Read Less

Goodreads reviews for Six Wives: The Queens of Henry VIII

Elizabeth: The Struggle for the Throne