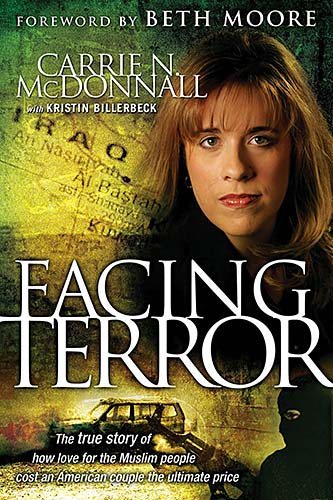 "The true story of how an American couple paid the ultimate price because of their love of Muslim people"--Provided by publisher. Read More
They were willing to pay the ultimate price to help the people they'd come to love.March 15, 2004?Carrie McDonnall and her husband, David, had just spent the day surveying refugee camps. They were in a hurry to reach the safety of their home before nightfall. Suddenly, the crowded street they were on became eerily quiet. And then, out of nowhere came an explosion of bullets and shrapnel . . .Within hours their tragedy was all over the news. But who was this couple? And what motivated them to risk their lives working in a land torn by centuries of conflict? Here is Carrie and David's captivating story of falling in love with God, with each other?and with the Arab Muslims they were called to serve.This is not only the spell-binding account of a day turned tragic by terrorists?a day that made headlines around the world?but the greater story that the papers never tell: of the mysterious Middle East and its warm-hearted people. As you are transported to this ancient landscape, watching modern events unfold, you'll read of God's Love Story for people everywhere. You'll also witness Carrie's journey toward healing, and discover the renewed reason for hope that we all can have in troubled times. Read Less

A Primer of Chess