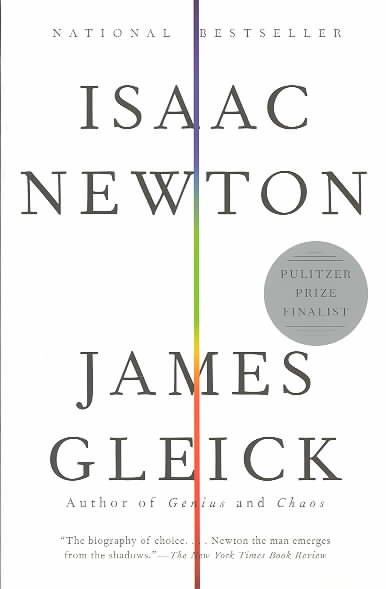 A portrait of one of the world's greatest scientific minds traces the evolution of Isaac Newton's scientific thought, from his early years at Cambridge University through his critical contributions to the history of science. Read More
Isaac Newton was born in a stone farmhouse in 1642, fatherless and unwanted by his mother. When he died in London in 1727 he was so renowned he was given a state funeral—an unheard-of honor for a subject whose achievements were in the realm of the intellect. During the years he was an irascible presence at Trinity College, Cambridge, Newton imagined properties of nature and gave them names—mass, gravity, velocity—things our science now takes for granted. Inspired by Aristotle, spurred on by Galileo’s discoveries and the philosophy of Descartes, Newton grasped the intangible and dared to take its measure, a leap of the mind unparalleled in his generation.James Gleick, the author of Chaos and Genius, and one of the most acclaimed science writers of his generation, brings the reader into Newton’s reclusive life and provides startlingly clear explanations of the concepts that changed forever our perception of bodies, rest, and motion—ideas so basic to the twenty-first century, it can truly be said: We are all Newtonians. Read Less

Chaos: The Making of a New Science

Genius: The Life and Science of Richard Feynman