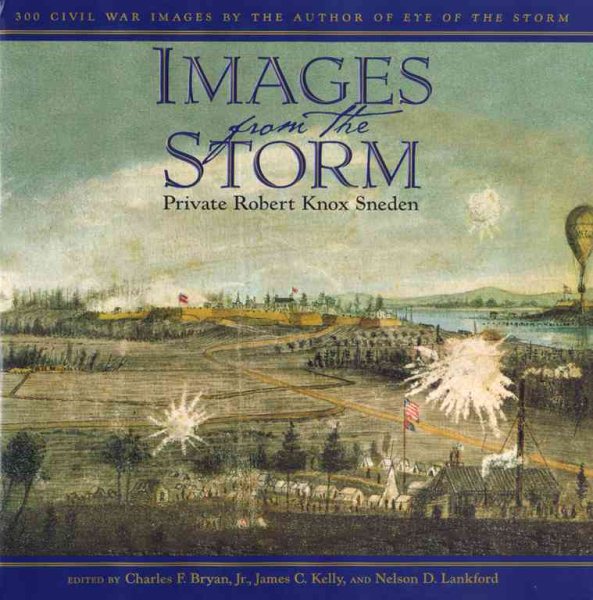 A retrospective study of the work of Robert Knox Sneden continues with this publication of hundreds more images from the Union cartographer's collection of Civil War sketches, engravings, and maps. Read More
The Civil War legacy of Robert Knox Sneden is an unparalleled treasure trove of words and pictures. The publication of the bestselling Eye of the Storm in the fall of 2000 first brought his memoir to light, accompanied by a sample of his artwork. In all, however, he crafted some 900 watercolors and sketches. Now, with the 300 watercolors, sketches, maps, and diagrams in Images from the Storm, his artistic legacy can be appreciated on its own terms -- an achievement equal in magnitude to his writings, and unsurpassed by any other Civil War soldier-artist. Images from the Storm presents the best of Sneden's art throughout his odyssey of combat, capture, imprisonment, and deliverance, a pictorial record of the war that puts the viewer in the shoes of a Union soldier as nothing else can. Sneden aimed for vivid detail and documentary accuracy in his maps, landscapes, battles, and scenes of camp life. He sketched the camps and surroundings of the Union army, the siege of Yorktown, the battle of Williamsburg, the approach of the army to within sight of the church spires of Richmond, and the tumultuous fighting retreat of the Seven Days' battles as the Union army shrank before a relentless Confederate offensive. He drew dozens of maps and sketched daily life around Washington, D.C., before his capture in autumn 1863. For the next thirteen months, Sneden was a prisoner of the Confederacy. In a drafty tobacco warehouse in Richmond, he sketched prison life and Confederate scenes before being packed with others aboard cattle cars for a jolting train ride south. In a remote corner of rural Georgia, he survived the outdoor prison at Andersonville and drew some of his most astonishing images of camp life and its suffering. When Andersonville was evacuated, he continued to make secret pencil sketches of Confederate prisons in Savannah and Millen, Georgia, and in Florence and Charleston, South Carolina. Finally freed in a massive prisoner exchange in Charleston harbor, he returned home to New York at Christmas 1864. He made little use of his architectural training thereafter, but devoted himself to compiling his memoir of the war and converting his pencil sketches into watercolors. A solitary man who never married, Sneden died at an old soldiers' home in Bath, New York, in 1918. His watercolors and his story were forgotten for nearly a century. Images from the Storm reproduces the best of Sneden's art in sharp colors, so we can appreciate fully the mastery of a miniaturist who saw it all, and sketched whenever and wherever he could. Read Less

Goodreads reviews for Images from the Storm

Eye Of The Storm: A Civil War Odyssey

Eye of the Storm: A Civil War Odyssey