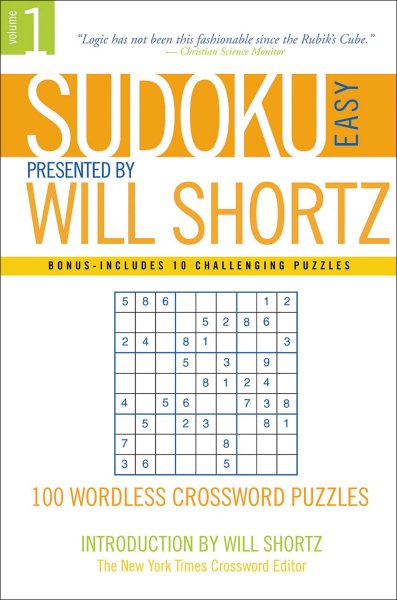 The hottest craze in puzzles!"On no account should any reader not already hooked so... Read More
The hottest craze in puzzles!"On no account should any reader not already hooked so much as a glance at a sudoku. That way lies addiction and madness. Sudoku are to the first decade of the twenty-first century what Rubik's Cube was to the 1970s." --Tom Utley, The Daily TelegraphFrom puzzlemaster and New York Times crossword editor Will Shortz comes sudoku, the new "wordless crossword" puzzle that's taking the world by storm! Once you start, you won't want to stop. These addictive puzzles are easy to explain--just fill the grid with numbers according to the few simple rules--but incredibly fun and engaging to complete. You don't need any mathematics knowledge: Just supply a pencil and an inquisitive mind.This brand-new collection features original, easy-to-solve sudoku from Will Shortz, along with an introduction that explains these fascinating puzzles and how to solve them. Once you've mastered the easier sudoku, try the last ten puzzles designed to challenge those who want to give their brains more of a workout. If you're a crossword fan, a fan of logic puzzles, or just a puzzle lover in general, you will be engrossed and delighted with sudoku!"A puzzling global phenomenon." --The Economist Read Less

Goodreads reviews for Sudoku Easy Presented by Will Shortz Volume 1

Will Shortz Presents The Big Beach Book of Sudoku: 300 Easy...