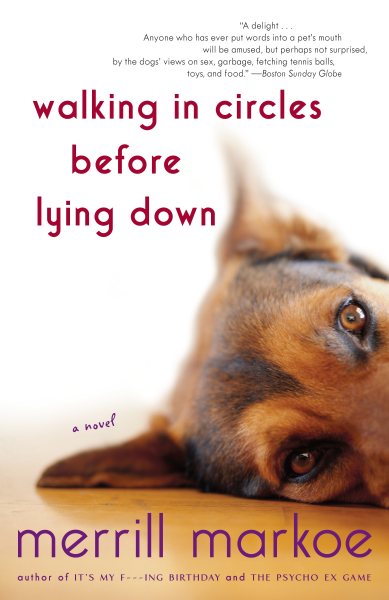 With her life rapidly falling apart in the wake of two divorces and her boyfriend dumping her, Dawn discovers that Chuck, a mixed-breed dog she had adopted from a local animal shelter, can talk and that he may have some solutions to her problems. Read More
Dawn Tarnauer’s life isn’t exactly a success story. Already twice divorced, the young Californian is too busy job-hopping to start a career, her current boyfriend insists on living “off the grid,” her Life Coach sister perpetually interferes with incomprehensible affirmations, her eccentric mother is busy promoting the culmination of her life’s work: The Every Holiday Tree, and her father is ending his brief third marriage while scheduling two dates for the same night. Dawn’s only source of security and comfort, it seems, is Chuck, a pit-bull mix from the pound. So, when her boyfriend announces that he’s leaving her for another woman, a despairing Dawn turns to Chuck for solace. “I should have said something sooner,” Chuck confides, as he tries to console her. “Couldn’t you smell her on his pants?” Dawn is stunned. It’s one thing to talk to your pets, but what do you do when they start talking back? It’s not just Chuck, either; she can hear all dogs–and man’s best friend has a lot to say. The ever-enthusiastic Chuck offers his tried-and-true advice on the merits of knocking over garbage and strewing it everywhere, auxiliary competitive peeing etiquette, and the curative powers of tossing a ball. Doubtful of her own sanity, Dawn considers that, in the ways of life and love, it might be better to trust Chuck’s doggie instincts instead of her own. Filled with sharp wit, biting humor, and canine conversation that would make Doctor Dolittle’s jaw drop, Merrill Markoe’s engaging, cleverly written novel is about the confusing search for love and the divine acts of dog.From the Hardcover edition. Read Less

Goodreads reviews for Walking in Circles Before Lying Down: A Novel

What the Dogs Have Taught Me

What the Dogs Have Taught Me: And Other Amazing Things I've...