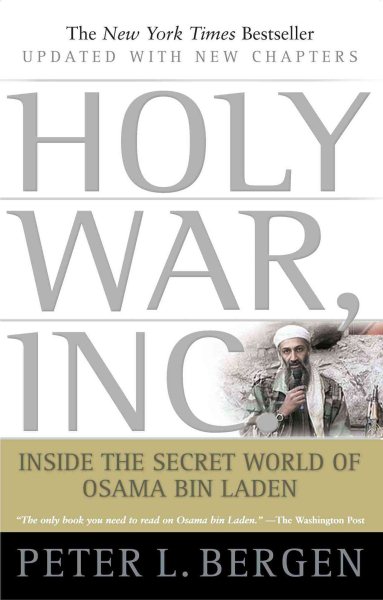 CNN's terrorism analyst examines Osama bin Laden's global terrorist network, al-Queda, discussing its operations and mission, the planning and execution of specific terrorist acts, and future threats from militant Islamic movements. Read More
On September 11, 2001, the world changed forever as more than three thousand men, women, and children lost their lives in the deadliest terrorist attack on American soil. The attack was masterminded by Osama bin Laden and his Jihad group -- an organization that CNN's terrorism analyst Peter Bergen calls Holy War, Inc. One of the few Western journalists to have interviewed bin Laden face-to-face, Bergen has produced the definitive book on the global Jihadist network, revealing: How bin Laden lives, travels, and communicates with his "cells." How his role in the crushing defeat of the Soviet Union in Afghanistan made him a hero to Muslims all over the world. How the bombings of the American embassies in Africa and the USS Cole in Yemen were planned and executed. What we can expect from Islamic extremists in the future. Above all, Peter Bergen helps us to see bin Laden's organization in a radically new light: as a corporation that has exploited modern technology and weaponry in the service of global terrorism and the destruction of the West. Both author and publisher will donate a portion of the proceeds from this book to the International Committee of the Red Cross. Read Less

The Longest War: The Enduring Conflict between America and A...