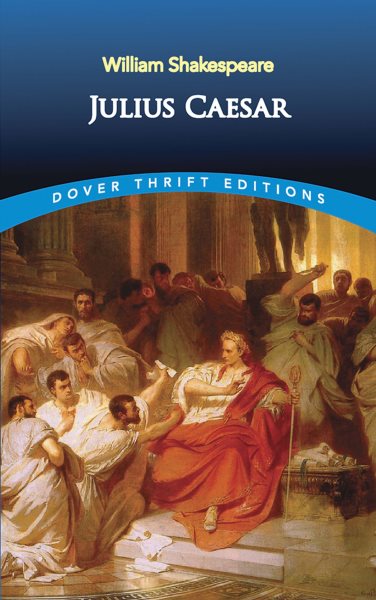 Great tragedy based on Plutarch's account of the lives of Brutus, Julius Caesar, and Mark Antony. Evil plotting, ringing oratory, high tragedy with Shakespeare's incomparable insight, dramatic power. Explanatory footnotes. Read More
Based on Plutarch's account of the lives of Brutus, Julius Caesar, and Mark Antony, Julius Caesar was the first of Shakespeare's Roman history plays. Presented for the first time in 1599, the play reveals the great dramatist's consummate ability to explore and express the most profound human emotions and instincts. So clearly and urgently does it impact its insights into history and human behavior, Julius Caesar is traditionally among the first of Shakespeare's plays to be studied at the secondary-school level.In addition to its compelling insights into the human condition, Julius Caesar is also superb drama, as Brutus, Cassius, and the other conspirators hatch a plot to overthrow Caesar, dictator of Rome. After Caesar is assassinated, Mark Antony cleverly turns the crowd against the conspirators in one of the most famous speeches in literature. In the civil war that follows, the forces of Mark Antony and Octavius Caesar eventually win out over the armies of Cassius and Brutus. Humiliated and desperate, both conspirators choose to end their lives. These tragic events unfold in a riveting dramatic spectacle that also raises profound questions about power, government, ethics, and loyalty.Now this great tragedy is available in this inexpensive edition, complete and unabridged with explanatory footnotes. Read Less