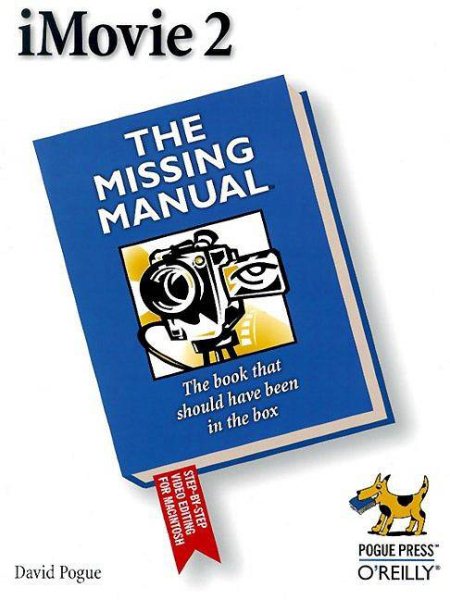 Explains how to use the Macintosh-based digital video editing program to polish home videos, covering special effects, transitioning, narration, sound, and saving films in QuickTime and on the Web. Read More
When it created iMovie in 1999, Apple Computer made digital video editing almost as easy as using a word processor--and even less expensive. Built into most modern Macintosh models is the circuitry needed to record pro-quality video from a digital camcorder, and then send the edited movies back to TV or tape with zero picture-quality loss.Now Apple takes the revolution to the next level with the dramatically enhanced iMovie 2.0. The new software adds the option of inserting new video over a continuous audio track; removes limitations on the number of raw clips from which to choose scenes; and offers bonuses such as special effects and brightness and contrast adjustments, much greater typographical flexibility in its title- and credit-maker, and a far more useful and complete audio-track editor.But one thing hasn't changed: iMovie 2, though much more sophisticated than its predecessor, still doesn't come with a single page of printed instructions.Pogue Press/O'Reilly's iMovie: The Missing Manual, released in May 2000, became an instant bestseller, requiring two reprints in three months and earning rave five-star reviews on Amazom.com. This entertaining guide covers every step of iMovie video production, from choosing and using a digital camcorder to burning the finished work onto CDs. The book's philosophy: Giving someone iMovie without also teaching basic film technique is like giving a map to a teenager without teaching him to drive.Now author David Pogue is back with an expanded, revised edition, now called iMovie 2: The Missing Manual, rewritten to cover iMovie 2 and nothing but.Far deeper and more detailed than the meager set of online help screens included with iMovie, the book helps iMovie users realize the software's potential as a breakthrough in the cost, complexity, and difficulty of desktop video production.With a technical review by Glenn Reid, architect and lead engineer of both iMovie and iMovie 2. Read Less

Switching to the Mac: The Missing Manual, Mountain Lion Edit...