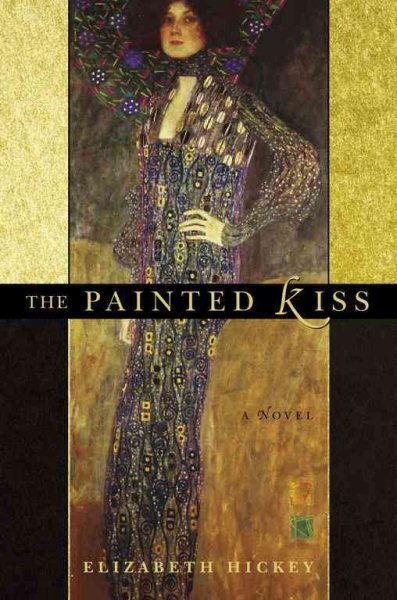 Meeting painter Gustav Klimt at the age of twelve, Emilie Flèoge, the youngest daughter of a Viennese businessman, matures into a sanguine adult and becomes the artist's mistress as well as the owner of an exclusive fashion house. Read More
In her passionate and atmospheric debut novel, The Painted Kiss, Elizabeth Hickey reimagines the relationship between Gustav Klimt and the woman whose name he uttered with his dying breath. Vienna in 1886 was a city of elegant cafés, grand opera houses, and a thriving and adventurous artistic community. It was there that twelve-year-old Emilie Flöge met the con-troversial libertine and painter Gustav Klimt. When Klimt is hired by Emilie's bourgeois father to give her some basic drawing lessons, he introduces her to a subculture of dissolute artists, wanton models, and decadent patrons that both terrifies and fascinates her. The Painted Kiss follows the developing relationship between Klimt and Emilie, who blossoms from a na?ve girl to a sanguine woman, becoming mistress to one of the twentieth century's most fascinating artists and the owner of an exclusive fashion house, which Klimt helps design. Fin de si?cle Vienna glitters with wealthy, beautiful women for Emilie to dress in her salon and for Klimt to undress in his studio. It is a world overflowing with the greatest artists, composers, and writers of the era, and yet doomed by the imminent collapse of the Austro-Hungarian Empire. Although she is never sure of her place in Klimt's life, Emilie is a constant presence, supporting him through tragedy, self-doubt, triumph, and scandal -- and ultimately serving as the model for his greatest masterpiece. The Painted Kiss is a moving love story that is as sensual and compelling as a work by Klimt himself. Read Less

Goodreads reviews for The Painted Kiss: A Novel

The Painted Kiss: A Novel