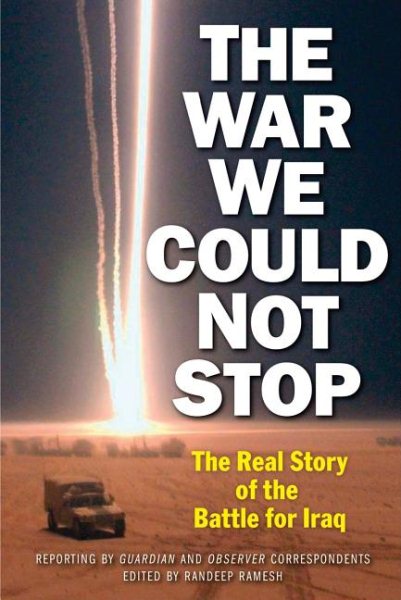 Provides accounts of the Iraq War by reporters embedded with coalition troops. Read More
The War We Could Not Stop, though written against the clock and without the benefit of either official papers or hindsight, is more than a simple eyewitness history. Suzanne Goldenberg pitched up in Baghdad in the third week of January. She left 89 days later having seen the most devastating attack on any city in modern times. Other reporters traveled with the coalition troops on ship and on land. At one point the Guardian and Observer between them had a dozen reporters and photographers inside Iraq. No future history of the war will be possible without reference to the daily dispatches of these and other journalists. Half a dozen reporters in America and three Arabic speakers around the region brought different perspectives. Defense, diplomatic, environmental, and political correspondents all played their parts. Toward the end of the fighting some peeled off from day-to-day writing to re-interview some of the central players in a story that had shaken the world. Millions of Americans flooded to the Guardian Unlimited website over the past months in search of a texture and range of both reporting and comment they felt lacking in the United States. This book provides a comprehensive narrative of that reporting. Read Less

Goodreads reviews for The War We Could Not Stop: The Real Story of the Battle for Iraq