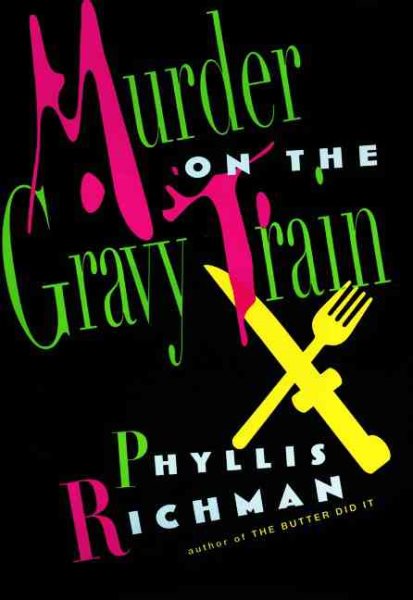 While researching the dark side of the restaurant business for ner new column, Chas Wheatley encounters several murders and a suicide, which plunge her into a world of betrayal, blackmail, and danger Read More
The most feared woman in Washington, Phyllis Richman, Washington Post restaurant and food critic, serves up the delicious second course to her successful debut novel, The Butter Did It. In Murder on the Gravy Train, Chas Wheatley, a food writer with a taste for sleuthing, takes on the scandalous world of Washington tongue waggers and the deep-throated secrets of the restaurant business. Researching her new column, Chas discovers something is rotten with Washington's most popular new restaurant when the head chef goes missing, Chas becomes highly suspicious: Not only is the food suffering, but no one is willing to give her a straight answer as to his whereabouts. Bodies begin to surface around the nation's capital, confounding the police. But with Chas's clever eye for detail, her love of good gossip, her talent for digging up the truth, and her connections in the newspaper and culinary worlds, she is compelled to delve deeper into the underbelly of the business--and onto a twisted trail of deceit, blackmail, and murder. Once again, Phyllis Richman offers an insider's glimpse into the fascinating and glamorous world of America's finest restaurants, wrapping it in a delectable tale of mystery, murder, and danger. Read Less

Goodreads reviews for Murder on the Gravy Train

The Butler Dit It

The Butter Did It: A Gastronomic Tale of Love and Murder

The Butter Did It: A Gastronomic Tale of Love and Murder (Ch...