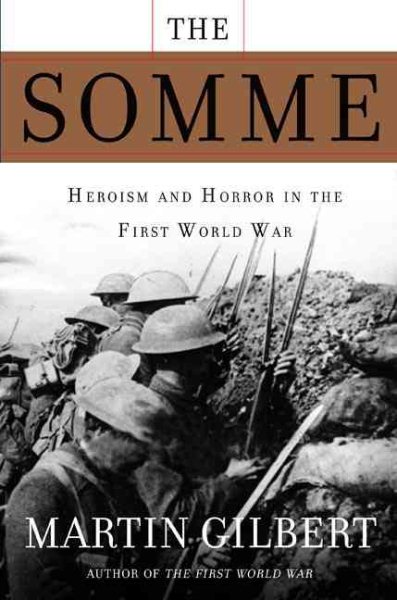 An account of the battle that claimed more than 300,000 lives describes the struggle between Allied troops and German forces along a fifteen-mile corridor along the Somme River in France that marked a turning point in World War I. Read More
From one of our most distinguished historians, an authoritative and vivid account of the devastating World War I battle that claimed more than 300,000 livesAt 7:30 am on July 1, 1916, the first Allied soldiers climbed out of their trenches along the Somme River in France and charged out into no-man’s-land toward the barbed wire and machine guns at the German front lines. By the end of this first day of the Allied attack, the British army alone would lose 20,000 men; in the coming months, the fifteen-mile-long territory along the river would erupt into the epicenter of the Great War. The Somme would mark a turning point in both the war and military history, as soldiers saw the first appearance of tanks on the battlefield, the emergence of the air war as a devastating and decisive factor in battle, and more than one million casualties (among them a young Adolf Hitler, who took a fragment in the leg). In just 138 days, 310,000 men died.In this vivid, deeply researched account of one history’s most destructive battles, historian Martin Gilbert tracks the Battle of the Somme through the experiences of footsoldiers (known to the British as the PBI, for Poor Bloody Infantry), generals, and everyone in between. Interwoven with photographs, journal entries, original maps, and documents from every stage and level of planning, The Somme is the most authoritative and affecting account of this bloody turning point in the Great War. Read Less

Goodreads reviews for The Somme: Heroism and Horror in the First World War

Arab-Israeli Conflict: Its History in Maps.