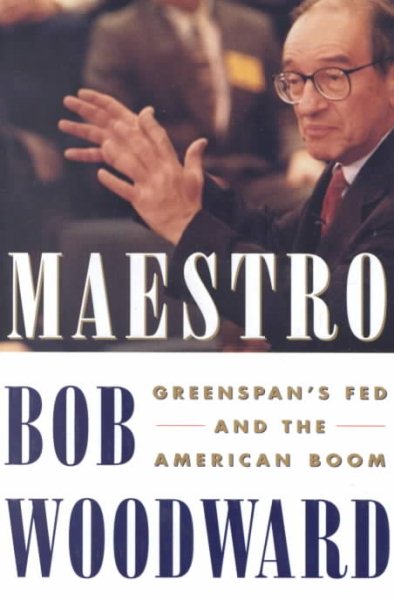 Chronicles economic policy through the Clinton presidency, focusing on the role of Alan Greenspan, and discussing Wall Street, technology, and other factors to explain how the current economic arena came into being. Read More
In eight Tuesdays each year, Federal Reserve chairman Alan Greenspan convenes a small committee to set the short-term interest rate that can move through the American and world economies like an electric jolt. As much as any, the committee's actions determine the economic well-being of every American. The availability of money for business or consumer loans, mortgages, job creation and overall national economic growth flows from those decisions. Perhaps the last Washington secret is how the Federal Reserve and its enigmatic chairman, Alan Greenspan, operate. In Maestro, Bob Woodward takes you inside the Fed and Greenspan's thinking. We listen to the Fed's internal debates as the American economy is pushed into a historic 10-year expansion while the world economy lurches from financial crisis to financial crisis. Greenspan plays a sometimes subtle, sometimes blunt behind-the-scenes role. He appears in Maestro up close as never before -- alternately nervous and calm, plunging into mathematics one moment and politics the next, skeptical, dispassionate, always struggling -- often alone. Maestro traces a fascinating intellectual journey as Greenspan, an old-school anti-inflation hawk of the traditional economy, is among the first to realize the potential in the modern, high-productivity new economy -- the foundation of the current American boom. Woodward's account of the Greenspan years is a remarkable portrait of a man who has become the symbol of American economic preeminence. Read Less

Goodreads reviews for Maestro: Greenspans Fed And The American Boom

Caught in the Act A True Story