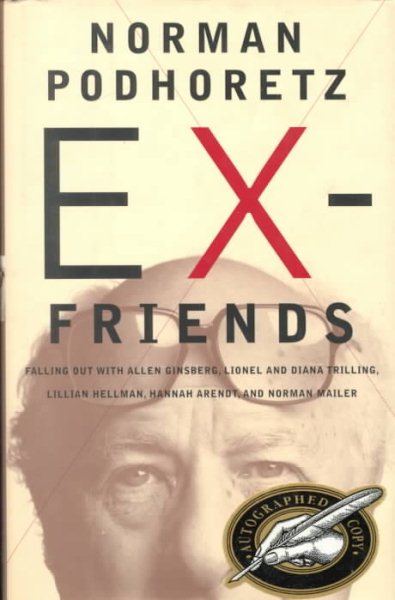 The author shares anecdotes about his significant literary battles, bringing alive such New York institutions as Norman Mailer and Lillian Hellman Read More
Allen Ginsberg, Lionel and Diana Trilling, Lillian Hellman, Hannah Arendt, and Norman Mailer -- all are ex-friends of Norman Podhoretz, the renowned editor and critic and leading member of the group of New York intellectuals who came to be known as "the Family." As only a family member could, Podhoretz tells the story of these friendships, once central to his life, and shows how the political and cultural struggles of the past fifty years made them impossible to sustain. With wit, piercing insight, and startling honesty, we are introduced as never before to a type of person for whom ideas were often matters of life and death, and whose passing from the scene has left so large a gap in American culture. Podhoretz was the trailblazer of the now-famous journey of a number of his fellow intellectuals from radicalism to conservatism -- a journey through which they came to exercise both cultural and political influence far beyond their number. With this fascinating account of his once happy and finally troubled relations with these cultural icons, Podhoretz helps us understand why that journey was undertaken and just how consequential it became. In the process we get a brilliantly illuminating picture of the writers and intellectuals who have done so much to shape our world. Combining a personal memoir with literary, social, and political history, this unique gallery of stern and affectionate portraits is as entertaining as a novel and at the same time more instructive about postwar American culture than a formal scholarly study. Interwoven with these tales of some of the most quixotic and scintillating of contemporary American thinkers are themes that are introduced, developed, and redeveloped in a variety of contexts, with each appearance enriching the others, like a fugue in music. It is all here: the perversity of brilliance; the misuse of the mind; the benightedness of people usually considered especially enlightened; their human foibles and olympian detachment; the rigors to be endured and the prizes to be won and the prices to be paid for the reflective life. Most people live their lives in a very different way, and at one point, in a defiantly provocative defense of the indifference shown to the things by which intellectuals are obsessed, Norman Podhoretz says that Socrates' assertion that the unexamined life was not worth living was one of the biggest lies ever propagated by a philosopher. And yet, one comes away from Ex-Friends feeling wistful for a day when ideas really mattered and when there were people around who cared more deeply about them than about anything else. Reading of a time when the finest minds of a generation regularly gathered in New York living rooms to debate one another with an articulateness, a passion, and a level of erudition almost extinct, we come to realize how enviable it can be to live a life as poignantly and purposefully examined as Norman Podhoretz's is in Ex-Friends. Read Less

Why Are Jews Liberals?

Why We Were In Vietnam

My Love Affair with America: The Cautionary Tale of a Cheerf...