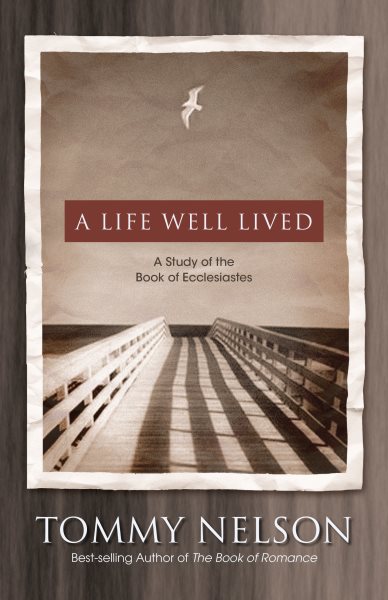 An in-depth look at the Book of Ecclesiastes which reveals why Solomon's conclusions ring louder than ever for today's believers. Read More
In the desire and quest to make sense of the world and our existence, three great sirens have lured men and women into a lull with the empty promise to make their lives meaningful. The great king of Israel, Solomon, though the wisest man, was not immune to their song. But at the end of his life, Solomon, in all of his God-given wisdom, stopped to contemplate on all that competed for his attention. He wrote his conclusions in the Book of Ecclesiastes.Tommy Nelson continues his study of Solomon's writings by taking an in-depth look at Ecclesiastes. In a world such as ours, where the search for meaning and purpose propels mankind to try everything under the sun, Solomon's conclusions ring louder than ever for a people who need answers more than ever. Read Less

Goodreads reviews for A Life Well Lived: A Study of the Book of Ecclesiastes

The Book of Romance: What Solomon Says About Love, Sex, and...

The Song of Solomon, A Study of Love, Sex, Marriage, and Rom...

The Song of Solomon, A Study of Love, Sex, Marriage, and Rom...