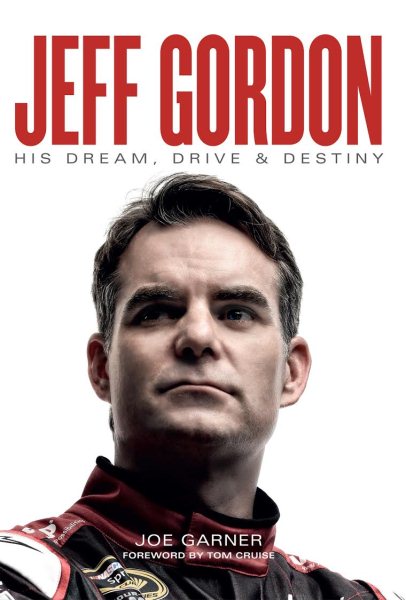 A biography of the four-time champion racing legend details his childhood, much-publicized divorce, relationship with contemporaries, and life after racing. Read More
Jeff Gordon: His Dream, Drive & Destiny is a New York Times best seller!“People are going to be able to read about me like they’ve never read about me before.” says Jeff Gordon. “We reveal some things that are definitely a little controversial, whether it be my divorce or talking about my parents’ separation, as well as the relationship between Jimmie Johnson and I. Although I’m a huge supporter of his and friend of his, how that has been challenged over time, as well as the separation with Ray Evernham when he left the team. It hasn’t always been great, perfect and happy times. It was tough to tell myself that if I’m going to write a book, I want it to be done in a way that shows who I truly am and the things I went through and not hold back. I think Joe Garner did an excellent job of pulling that out of me, although it was hard at times.” The first-ever authorized biography of Jeff Gordon, the four-time champion racing legend. For over a year, Garner interviewed and observed Gordon at races, special events, and at home. The book is based on extensive interviews with Gordon – as well as in-depth interviews with dozens of family members, friends, competitors, and colleagues, some of whom have never gone on the record before. Jeff speaks candidly, sometimes brutally so, about his childhood, his much publicized divorce, those he competed against, his family, and life after racing. This fully illustrated hardcover biography will allow privileged access to a wealth of exclusive unseen and rare material from Gordon’s personal photo and memorabilia collection. Gordon’s meteoric rise through racing’s ranks is a classic American success story. Readers will find inspiration in Gordon’s candid take on his pivotal life episodes. Read Less