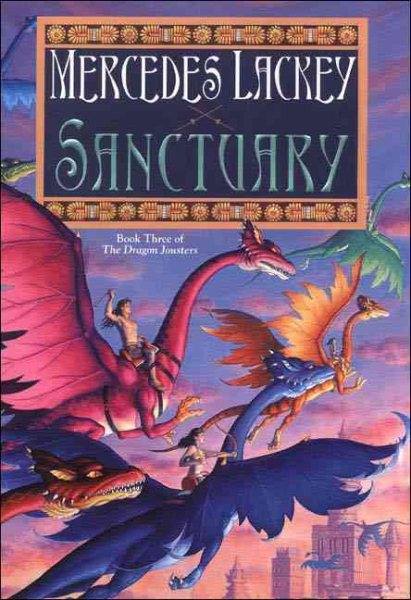 Kiron discovers that the world of Alta has a dark side when he attempts to enter into Altan noble society and exposes a plot orchestrated by the Magi to take over Alta with a powerful weapon called the Eye of Light. Read More
The young man known as Kiron, who had once been a dragon-boy called Vetch, had achieved more than he had ever dreamed possible. He had escaped the Jouster's compound in Tia on the back of Avatre - a scarlet dragon he had raised from the egg - a tame dragon that was bonded to him. As he had crossed the vast desert with the help of the nomads called the Veiled Ones, he had carried with him one of the greatest treasures of his world: the key to taming dragons. And when he reached Alta, the kingdom of his birth, his bravery had linked him with the family of a powerful nobleman, Lord Yi-tiren, who had, in turn, introduced him and his dragon-taming techniques to the compound of the Altan Jousters. He had been able to gather a group of dedicated young people who understood the rigors involved and were up to the task of raising a dragonet from the egg. And he had ended up with more than he had ever dreamed of: eight close friends, and eight beautiful, varied, spirited yet tame dragonets. Enough, when led by Kiron and Avatre, to form an entire fighting wing.But there was also a dark side to Kiron's life. For in gaining entree into Altan noble society, he had come to learn many distressing things about who really controlled Alta, especially with the help of Lord Ya-tiren's daughter Aket-ten, who had the magical Gifts of Animal Speech, Silent Speech, and the Far-Seeing Eye. Aket-ten was a Fledgling of the magical order of the Winged Ones, and this gentle order was being threatened by a more powerful and less ethical magical order - the Magi. The Magi were subtly but systematically draining the Winged Ones of their magic - thus strengthening themselves. But that was only part of the evil picture. For Aket-ten and Kiron soon began to realize that the Magi were plotting to surreptitiously replace the royal Great Ones and rule Alta, and that they had built a terrible weapon, the Eye of Light, which could kill from afar, and would support their reign with terror.Once more, Kiron and Aket-ten had risen to the occasion and had managed, through careful planning, to flee Alta with all the Jousters and dragons, some members of the royal family, and close friends. They had escaped to the Lost City of the desert, a place now called Sanctuary.Kiron knew that they had to hide and increase their numbers before they would have a ghost of a chance against the Magi. But they had garnered a huge advantage - they had freed the dragons of Tia, thereby destroyng the Tiran Jousters' army and effectively ending the war between Tia and Alta. Only Ari, the Jouster who had trained Kiron, had kept his dragon, and had come to join them in Sanctuary. But just surviving in the desert, with more and more sympathetic refugees appearing every day, more people to feed and house, more dragonets to raise, was a daunting prospect. And it was just a matter of time before the Magi found the hiding place of the rebels and attacked.Could Kiron, Aket-ten, Ari, and their allies muster their forces in time to face the Magi? And how would they counter the deadly effects of the Eye of Light? Read Less

The Robin & the Kestrel :Bardic Voices 2