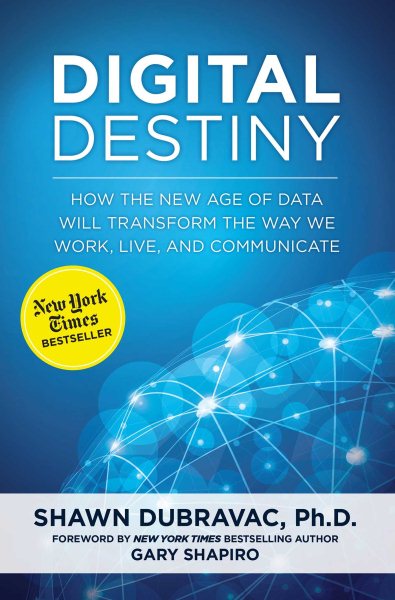 Argues that the mass adoption of digital technologies portends the beginning of a new era for humanity, a situation that promises to solve ancient problems, create new challenges, and transform lives. Read More
A New York Times Bestseller!Our world is about to change.In Digital Destiny: How the New Age of Data Will Change the Way We Live, Work, and Communicate, Shawn DuBravac, chief economist and senior director of research at the Consumer Electronics Association (CEA), argues that the groundswell of digital ownership unfolding in our lives signals the beginning of a new era for humanity. Beyond just hardware acquisition, the next decade will be defined by an all-digital lifestyle and the &#147;Internet of Everything”&#151;where everything, from the dishwasher to the wristwatch, is not only online, but acquiring, analyzing, and utilizing the data that surrounds us. But what does this mean in practice?It means that some of mankind’s most pressing problems, such as hunger, disease, and security, will finally have a solution. It means that the rise of driverless cars could save thousands of American lives each year, and perhaps hundreds of thousands more around the planet. It means a departure from millennia-old practices, such as the need for urban centers. It means that massive inefficiencies, such as the supply chains in Africa allowing food to rot before it can be fed to the hungry, can be overcome. It means that individuals will have more freedom in action, work, health, and pursuits than ever before. Read Less

Goodreads reviews for Digital Destiny: How the New Age of Data Will Transform the Way We Work, Live, and Communicate