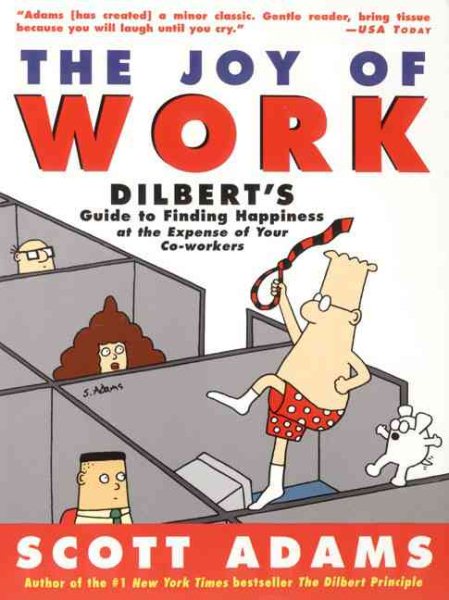 Offers a guide to finding creativity, success, and joy in a corporate milieu that often seems actively antithetical to these concepts Read More
‘I cried because I did not have an office with a door, until I met a man who had no cubicle.’ DilbertA message from Scott Adams:I think the next wave of office design will focus on eliminating the only remaining obstacle to office productivity: your happiness. Happiness isn’t a physical thing, like walls and doors. But it’s closely related. Managers know that if they can eliminate all traces of happiness, the employees won’t be so picky about their physical surroundings. Once you’re hopelessly unhappy, you won’t bother to complain if your boss rolls you up in a tight ball and crams you into a cardboard box.As soon as I noticed this disturbing threat to workplace happiness, I did some investigative work and discovered it wasn’t confined to the issue of office design. Companies were making a direct frontal assault on employee happiness in every possible way! I knew there was only one thing that could stop the horror.It was time for another Dilbert book. It might sound corny, but I felt an obligation to society. People told me it was time for me to ‘give something back to the community.’ This scared me, until I realised that no one knows I furnished my house with street signs and park benches. So I interpreted the ‘give something back to the community’ message as a plea for me to write this book and then charge the community to read it.In the first part of this book I will tell you how to find happiness at the expense of your co-workers, managers, customers, and – best of all – those lazy stockholders. The second part of the book teaches you my top-secret methods for mining humour out of ordinary situations, thus making it easier to mock the people around you. The third part of the book is made entirely of invisible pages. If the book seems heavier than it looks, that’s why.Office Prank #44: Sounds That Drive Co-workers Crazy. You can produce sounds in the office that will drive your co-workers insane. That can be very entertaining. Every co-worker is different, so you might have to experiment to find the sounds that are most annoying to your cubicle neighbour. It’s worth the effort. Read Less

Goodreads reviews for The Joy of Work: Dilbert's Guide to Finding Happiness at the Expense of Your Co-Workers

The Dilbert Principle: A Cubicle's-Eye View of Bosses, Meeti...