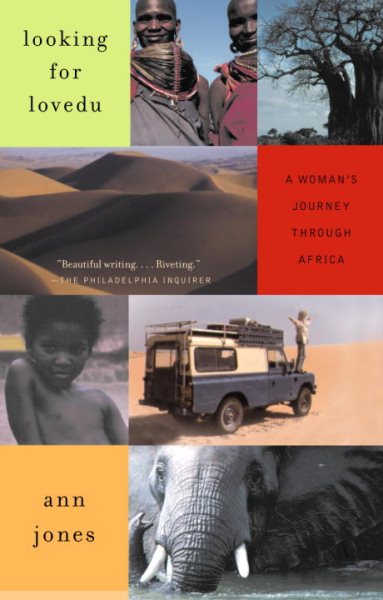 The travel writer describes her and a companion's adventure-filled odyssey through Africa in search of the Lovedu, a legendary tribe ruled by a rainmaking queen who became the inspiration for Haggard's She, detailing their experiences as they journeyed from the Sahara to Zaire. Read More
The adventure writer Ann Jones tells the story of her overland journey, with the British photographer Kevin Muggleton, from one end of Africa to the other. Their purpose: to reach the southernmost tip of the continent and find the Lovedu people, a legendary tribe guided by the "feminine" principles of compromise, tolerance, generosity, and peace. A tribe that was known for its use of skillful diplomacy instead of warfare, and was ruled by a wise and powerful magician, a great rainmaking queen - the inspiration for H. Rider Haggard's novel She.Together Jones and Muggleton set out from England in a 1980 powder-blue army surplus Series III Land Rover. They hurry through France and Spain to Gibraltar and board an intercontinental ferry to North Africa. In Morocco they work a scam to circumvent government red tape, and travel on toward the first great challenge of the journey: the Sahara, where they set out alone, through roadless shifting dunes, across the great apricot-colored expanse of desert.Ann Jones writes of how she travels on in search of the Lovedu people: through Tanzania and Malawi and the Tete Corridor of Mozambique to the ruins of the once-magnificent city of Great Zimbabwe. She writes of crossing the Limpopo River into South Africa, where her long journey culminates in an audience with Modjadji V, Queen of the Lovedu. Read Less

Goodreads reviews for Looking for Lovedu: A Woman's Journey Through Africa

When Love Goes Wrong: What to Do When You Can't Do Anything...

Kabul in Winter: Life Without Peace in Afghanistan