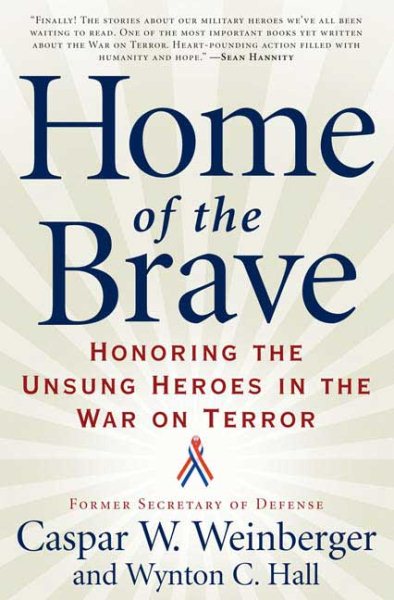 Presents the stories of nineteen servicemen and women who fought in the Afgahan and Iraq wars and who were given the highest honors for their extraordinary heroism and bravery. Read More
They are nineteen of the most highly decorated soldiers, sailors, airmen, and marines in the United States military, and yet most Americans don’t even know their names. In this riveting, intimate account, former Secretary of Defense Caspar Weinberger and Wynton C. Hall tell stories of jaw-dropping heroism and hope in Afghanistan and Iraq. Home of the Brave takes readers beyond the bullets and battles and into the hearts and minds of the men and women who are fighting terrorists overseas so that America doesn’t have to fight them at home. These are the powerful, true-life stories of the hopes, fears, and triumphs these men and women experienced fighting the War on Terror. But more than that, these are the stories of soldiers who risked everything to save lives and defend freedom. Including:*Lieutenant Colonel Mark Mitchell, the Green Beret leader whose 15-man Special Forces team took 500 Al Qaeda and Taliban prisoners, and posthumously repatriated the body of the first American to die in combat in the War on Terror, CIA agent Johnny “Mike” Spann.*Army National Guard Sergeant Leigh Ann Hester, the first woman ever to be awarded the Silver Star for combat, whose sharp-shooting and bravery played an enormous role in fighting off over fifty Iraqi insurgents while her ten-person squad protected a convoy of supplies on the way to fellow soldiers. *Sergeant Rafael Peralta, a Mexican immigrant, enlisted in the Marines the same day he received his green card. Wounded from enemy fire, Peralta used his body to smother the blast of an enemy grenade and gave his life so that his marine brothers could live. These real-life heroes remind us of American history’s most enduring lesson: Ours would not be the land of the free if it were not also the home of the brave. Read Less

Goodreads reviews for Home of the Brave: Honoring the Unsung Heroes in the War on Terror

Fighting for Peace: Seven Critical Years in the Pentagon

In the Arena: A Memoir of the 20th Century

In the Arena: A Memoir of the 20th Century