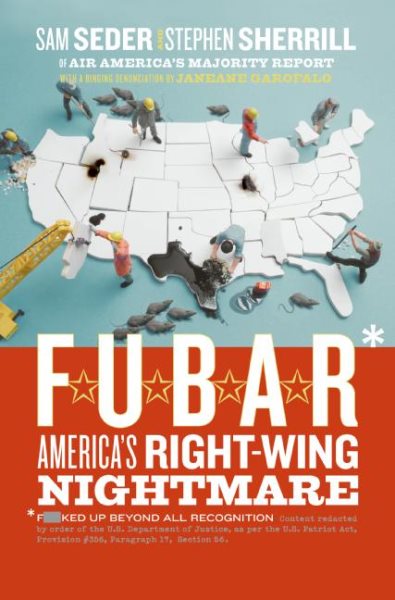 Presents a satirical analysis of life in the United States and argues that the Right-wing has a blueprint for total domination over everybody's money, mind, sex life, and even the afterlife. Read More
The United States has survived clueless presidential administrations before. But no matter how enormous the crisis -- the Great Depression, Vietnam, Watergate, Monica Lewinsky's thong -- America's always come out looking like, well, America.This time, however, something's different. Things aren't just screwed up; they're f&#!$d up beyond all recognition. Wel-come to F.U.B.A.R., a hilarious and scathing satire of the American Right's bad behavior, by the creators of Air America's Majority Report. If you're a liberal who's somehow not panicked over the state of our Union, or if you're a Republican who's just having voter's remorse, or if you think what's happening to the country is just politics as usual, F.U.B.A.R. will open your eyes to our current national nightmare. With completely unfair and unbalanced analysis, authors Sam Seder and Stephen Sherrill take readers on a whirlwind tour of what's left of the United States, exposing the truth about the Right's blueprint for total domination -- over your money, your mind, your sex life, and even your place in the afterlife (yes, they have a plan for that, too).Along the way, they'll answer your most pressing questions, like:I'm gay. Can I still be a Republican?Do I need to own my own congressman, or is a time share okay?Is New York Times columnist Thomas L. Friedman's mustache, in fact, the sign of the Beast?I thought we ran the media. What happened?Finally, Seder and Sherrill offer a helpful and hopeful vision for a future that remarkably doesn't look like a cross between the Matrix and Mayberry. F.U.B.A.R. is the wake-up call America has been waiting to receive -- and it will probably be wiretapped. Read Less

Ramu and Chennai, brothers of the wild

Waiting for Snow in Havana: Confessions of a Cuban Boy